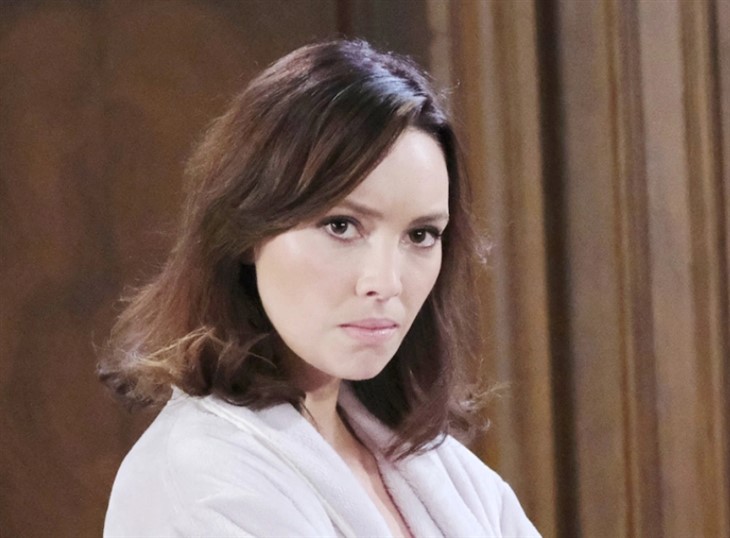 Days of Our Lives spoilers reveal that in Salem after months of trying to figure out Gwen Rizczech, we are finally going to find out the truth. What is driving her to commit such evil acts against Abigail DiMera (Marci Miller)? Why does she hate the Deveraux family so much and want them to suffer? Actress Emily O’Brien says that some fans will empathize with Gwen’s pain.

Days Of Our Lives Spoilers – Much More Than A Paternity Secret

DOOL spoilers reveal that a lot of fans are convinced that Gwen is Jack Deveraux’s (Matthew Ashford) secret daughter and Abigail’s half-sister. We thought that at first, too. However, recent statements by the actress and head writer indicate it’s much more than a paternity secret. He told Soap Opera Digest,

“So, coming off what happens on New Year’s, we will find out exactly what that is, and it will not only have big consequences for Chad and Abigail’s family, but for the whole Deveraux family. And then, of course, the next chapter grows from there.”

Days Of Our Lives Spoilers: Steve And John Team Up – Can They Find The Truth?

Days of Our Lives spoilers reveal that maybe one of Abigail’s alter personalities caused the death of someone Gwen cares about. That would explain why she didn’t think twice about frying her brain. As for why target the entire family, it’s most likely because Jack and Jennifer Horton (Cady McClain) made sure Abigail didn’t go to prison because she was mentally ill. So, in Gwen’s mind, they got away with murder and that would certainly trigger a lot of hate for the victim’s family.

It would also explain what O’Brien told Michael Fairman about Gwen’s motivation. The actress feels sorry for Gwen and indicated it was a sad backstory. She also predicts that some fans will actually empathize with the villain. That’s another big clue that this is something more serious than a secret love child.

What do you think is driving Gwen’s fury? Is this really just about a paternity secret like some fans think? Or is this about something much more serious, like the death of someone Gwen cares about? Do you think there is anything that would have you feel empathy for Gwen or justify her actions? Let us know your thoughts and theories. As always, we will keep you posted with new developments and updated information as it becomes available.