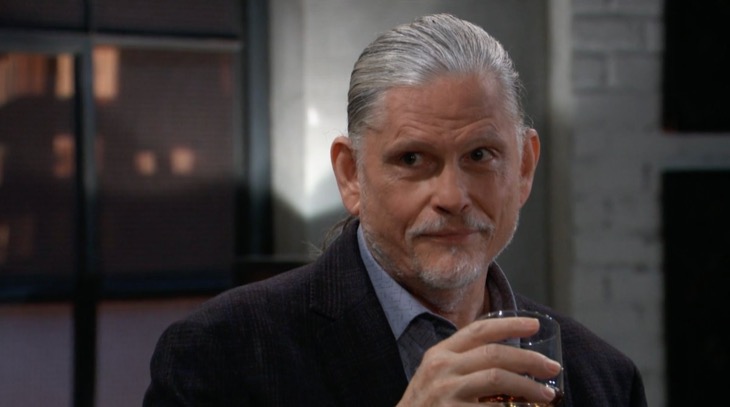 General Hospital spoilers tease that in Port Charles, NY Cyrus Renault (Jeff Kober) appears to have a soft side and a wounded inner child with a great big mommy hole in his heart! Laura Collins (Genie Francis) clearly saw that – but she had a huge problem with the man that he has become. General Hospital viewers want to know, can Cyrus Renault be redeemed?

General Hospital viewers will recall that Cyrus actually had tears in his eyes when his mother wouldn’t accept his apologies and forgive him when he visited her. He was the one who paid all of Florence Grey’s (originally Anne Collings) bills for her care and had come to see her in person for the first time in years on her birthday. He put his credit cards, his General Hospital ID badge, and a bunch of one hundred dollar bills on her bed, but she just pushed them away. She pushed him away too, and she started getting upset.

At that point, Laura took him out in the hall and told him not to ask his mother for something she couldn’t give – namely, her forgiveness. It was at that point also she told him she understood what happened when Cyrus, as a rebellious teenager, got into a car he was told he was not supposed to drive and took off and accidentally ran over their father, Gordon Grey (Eric Server, Howard Sherman) killing him instantly. It was that unfortunate occurrence that Florence was not able to forgive Cyrus for, and neither did Martin Grey (Michael E. Knight), Laura’s other newfound half-brother.

Florence didn’t have a really good reaction when she found out who Laura was either. Longtime General Hospital viewers will recall that Laura’s mother, Lesley Webber (Denise Alexander) was told Laura was stillborn and she was put up for adoption by Gordon. It is not known if Florence ever knew of Laura before they met in her room at the care facility. She knew that Gordon ran around on her! It was what put her in General Hospital to begin with all those years ago as Lesley’s patient. She had a terrible nervous condition and ulcers due to her husband’s constant philandering!

GH Spoilers – Franco Baldwin, A Serial Killer, Was Redeemed By A Good Woman’s Love – Can Cyrus Be Redeemed By Sisterly Love?

Cyrus has a huge mommy shaped hole in his heart going back to at least his teenage years. It is not known if Martin was favored over Cyrus when they were younger than that, and Florence perhaps made the mistake of making Martin her good boy and withholding love from Cyrus. General Hospital viewers will recall that Franco Baldwin (Roger Howarth) was once a serial killer. True, it was a brain tumor that caused his killing sprees, but once that was dealt with his gentler nature came out. He also struggled with childhood trauma, although it was of a different nature, and once he fell in love with Elizabeth Webber, now Elizabeth Baldwin (Rebecca Herbst) he was redeemed by a good woman’s love.

Everything he does is for her. Cyrus would want to have to change, and there is the problem of the crimes he has committed and not paid for. But he has a readymade therapist in his brother-in-law Dr. Kevin Collins (Jon Lindstrom) and a mother’s heart in his half-sister Laura. Kevin’s dealt with a much worse brother, so Cyrus won’t be that challenging! Cyrus would have to want to change; could Laura’s acceptance and sisterly love be his impetus to do so?