The Bold And The Beautiful Spoilers: Carter Confronts Zende, Learns About Zoe’s Flirting 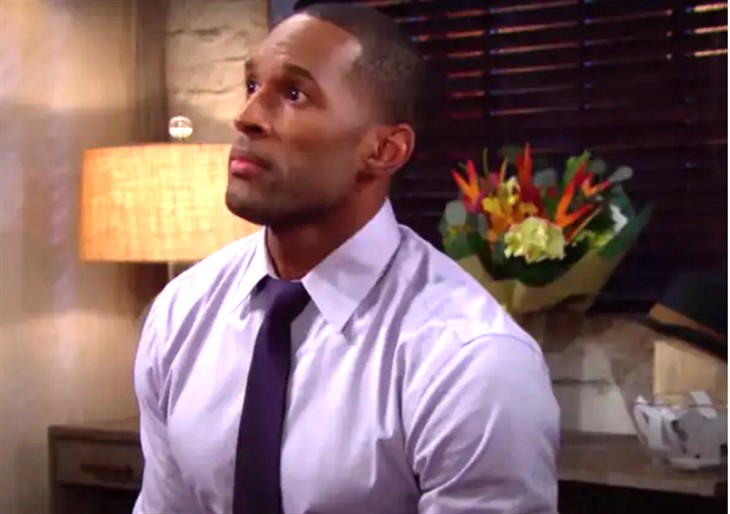 The Bold and the Beautiful spoilers in Los Angeles for 2021 reveal that Carter Walton (Lawrence Saint-Victor) finds out about Zoe Buckingham’s (Kiara Barnes) flirting. He won’t break up with his fiancee but will set firm friendship boundaries with Zende Forrester (Delon de Metz). We are thinking Paris Buckingham (Diamond White) tried to get back at her sister by exposing her dirty little secret.

The Bold And The Beautiful  – Confronting Zoe Buckingham

B&B spoilers reveal that in 2021, Carter and Zoe will still be engaged, but that doesn’t mean they will continue with the wedding. There are some issues to work out first, like Zoe daring to demand Carter perform his job a certain way. He’s also not a fan of her nasty reaction to him helping Paris. Well, it seems that Zoe is going to be in the hot seat next. Carter learns that Zende and Zoe have flirted, which isn’t going to make him happy.

Even though Carter will be angry about almost being betrayed, but he will mostly be heartbroken. He is so taken with Zoe, but she’s not the person that he thinks. They barely know each other and it’s certainly too soon to get married. After taking some time to think about the situation, Carter comes up with how he’s going to handle it.

The Bold And The Beautiful  – Setting Boundaries With Zende Forrester

The Bold and the Beautiful spoilers from Soap Opera Digest confirmed that Carter will set friendship boundaries with Zende. Executive producer and head writer Bradley Bell told the publication, “Zoe and Paris navigate their relationship and we learn more of their backstory, while Carter and Zende define the boundaries of their relationship.”

Even though the scribe didn’t say exactly what kind of boundaries that Carter sets, we think it falls something along the lines of, “stay away from my woman!” Now, we don’t see Carter as being controlling, jealous, or possessive. So we don’t think he will prevent Zoe and Zende from working together, but maybe he should. Most of the time, they don’t seem to be doing any actual work. Instead, they waste time serenading each other with love songs.

B&B Spoilers – Will They Still Get Married?

As for if Carter and Zoe will still get married, Bell wouldn’t give that way. He only said maybe they will and maybe they won’t. We are thinking that they won’t make it down the aisle in 2021. That doesn’t mean they split up, but maybe Carter will realize he’s marrying someone he doesn’t even really know. He might decide it’s better to have a very long engagement than to file for divorce. What do you think is going to happen with this couple? Will Carter continue to find out more things about Zoe that make him question her loyalty?