Days Of Our Lives Spoilers: Steve And John Hunt For Tripp’s Secret Relative, Will Charlie Be Punished? 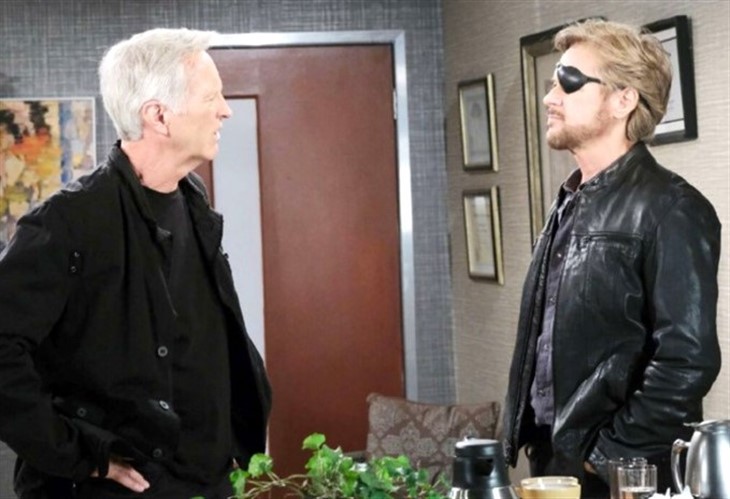 Days of Our Lives spoilers reveal that In Salem John Black (Drake Hogestyn) and Steve Johnson (Stephen Nichols) are on opposite sides of the rape story. However, they will join forces with a common goal. Steve is determined to find Tripp Dalton’s (Lucas Adams), secret relative. As for John, he wants the right man arrested, whether that’s Tripp or someone else.

Days Of Our Lives Spoilers  – Best Friends On Different Sides

DOOL spoilers reveal that John and Steve have been best friends for many years. They have stuck together even when it didn’t look like they would. However, Allie Horton’s (Lindsay Arnold) rape is different. It has torn the men apart because John sides with Allie, but Steve believes Tripp Dalton (Lucas Adams). Even though they are on opposite teams, “Black Patch” will work together to solve the case.

After speaking with Allie, Steve came up with a theory. Kayla Brady (Mary Beth Evans) thinks it is very unlikely and would be quite a far-fetched coincidence. However, Steve’s gut is telling him to follow that lead. Tripp having a close relative he knows nothing about would explain the DNA test done on Henry Horton (Jayna and Kinsley Fox). Usually, when Steve comes up with theories, he’s pretty accurate. He just can’t make sense of how or why it all went down. In order to find out, Steve needs to crack the case, but he can’t do it alone.

Days Of Our Lives Spoilers: Gwen Admires Chad, But Crushes His Soul Anyway

Days of Our Lives spoilers reveal that Steve knows he needs to get John on board with this “case.” He reaches out and the two end up in another argument. However, Steve finally convinces him to partner with him on this one because no matter what, they all just want the truth. Steve tells John that if there is even a microscopic chance that Tripp is innocent, he will want to know who hurt Allie. This is what gets John to agree to Steve’s plan.

Steve and John are basically starting out on the case with zero information. They don’t have a physical description if the guy lived in London or was visiting if he drove a car or had a tattoo. All they have is Tripp claiming he’s innocent and of course, Allie can’t remember much from that night. However, there are some things that will go in their favor and help them solve the mystery.

For one, Charlie Dale (Mike C. Manning) is holding Ava Vitali (Tamara Braun) hostage and plans on killing her. We know that isn’t going to happen, so she gets saved somehow. As we previously speculated two weeks ago, Claire Brady (Isabel Durant) will be the one to interrupt the murder-in-progress.

There is one more scene that will help crack the case. Tripp tells Allie that if he’s telling the truth, then that means the rapist is still out there hurting other women. This makes Allie more determined than ever to find out what happened. So, she goes to Marlena Evans (Deidre Hall) and asks to be hypnotized. It looks like this story will finally wrap up in the next two weeks. Unfortunately, a lot of friendships and relationships were damaged in the process.