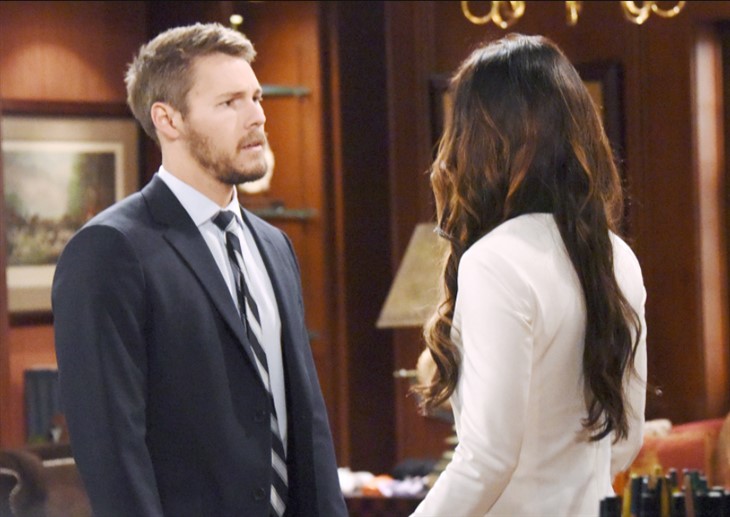 The Bold and the Beautiful spoilers reveal that in Los Angeles Steffy Forrester (Jacqueline MacInnes Wood) learns that she is pregnant. John Finnegan (Tanner Novlan) isn’t the first person she tells, though. She reaches out to Liam Spencer (Scott Clifton) and all he can talk about is how the baby will affect his relationship with Hope Logan (Annika Noelle).

The Bold And The Beautiful Spoilers – Steffy Forrester Is Pregnant

B&B spoilers reveal that Steffy will find out during the week of January 4 that she is pregnant. You would think that she would tell Finn first. After all, they are in a relationship together. They seem to be getting more serious. Finn has opened up about his future and his desire for children. But Steffy doesn’t tell Finn right away and in fact, she tells someone else first.

Steffy informs Liam that she is pregnant. They both knew this could be a possibility. That’s what happens when two people hop in bed. As with most soap storylines, when one cheats, a baby is guaranteed. According to the new issue of Soap Opera Digest, Steffy doesn’t exactly get the response from Liam that she was looking for.

The Bold And The Beautiful Spoilers: Carter Confronts Zende, Learns About Zoe’s Flirting

The Bold And The Beautiful Spoilers – ‘Steam’ Fantasy Crushed

The Bold and the Beautiful spoilers reveal that Steffy had this fantasy in her head that she would tell Liam they made another baby. He would be so excited and they would go back to being a happy little family. Well, that fantasy gets crushed pretty quick. Liam doesn’t ask Steffy if she’s sure if she knows for certain who the father is or even how she wants to deal with this. He only cares about how a baby will affect his relationship with Hope.

Now, it is confirmed that Liam and Steffy’s secret is exposed not long after they find out there’s a baby on the way. It is going to restart the feud between Hope and Steffy, with Ridge Forrester (Thorsten Kaye) taking one side and Brooke Logan Forrester (Katherine Kelly Lang) on the other.

The Bold And The Beautiful (B&B) Spoilers: Should Steffy Take Liam Back? – Finn Is The Better Man #bb #BoldandBeautifulhttps://t.co/kKCSeUuGaQ

As for how Finn deals with the news, head writer Bradley Bell previously told the magazine that he will do something unexpected. He also explained that Finn is not a pushover, so we are thinking he either dumps Steffy or punches Liam in the face. As for what happens with Liam? We’re not quite sure yet, but if there is such a thing as a Soap God, please strike him with lightning! Steffy and Hope both deserve someone much better than Liam!

Who do you think is the father of Steffy Forrester’s baby? Will Finn walk away from the relationship or stick around? What does the exposed secret mean for the future of Liam Spencer and Hope Logan? We will have to keep watching the CBS soap to find out.