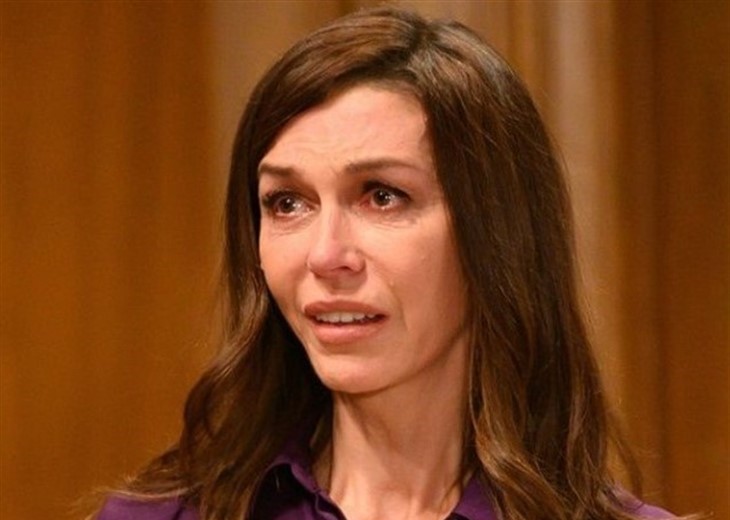 General Hospital spoilers tease that in Port Charles, NY Anna Devane (Finola Hughes) will be shocked when she finds out about the treatments that Franco Baldwin (Roger Howarth) is receiving in an upcoming episode of General Hospital!

General Hospital viewers will recall that Franco and Scott Baldwin (Kin Shriner) had flown to Geneva, Switzerland to receive treatment from Dr. Warren Kirk (Jamison Jones). Dr. Kevin Collins (Jon Lindstrom) had made the referral. This is the same WSB facility where until recently, Dante Falconeri (Dominic Zamprogna) had been receiving treatment for his post-traumatic stress disorder and brainwashing from his mission to take down Raj Patel (Noshir Dalal).

Liesl Obrecht (Kathleen Gati) had taken advantage of Dr. Kirk, who had been obsessed with her, in order to get released from The Hague and her charges dropped. Kirk’s passionate hormones had gotten the best of him when Scott and Franco arrived, and Scott barged in on him trying to rape Liesl. Liesl had tried to defend herself with a knife which Kirk had gotten away from her and when Scott slugged him, he fell on the knife and died! Liesl was intrigued when she heard through the door of Kirk’s office that Franco was hearing Peter August’s (Wes Ramsey) voice in his head!

Kirk had come to the diagnosis that there were still memories of Drew Cain’s (Billy Miller) in Franco’s brain that were trying to surface from underneath Franco’s own memories. In other words, Franco has been hearing things that Peter said to Drew. Franco recognizes Peter’s voice but has no idea of the context of what Peter is saying.

Anna has been talking to Dante Falconeri (Dominic Zamprogna) trying to assess his mental status recently. She wants to know whether the treatment he had been receiving for well over a year worked or not. Valentin Cassadine (James Patrick Stuart) had noted that Dante seemed to go into a daze momentarily when he was trying to get him to sign off on an arrangement for split custody of Charlotte Cassadine (Scarlett Fernandez). Because of that, and his intuition that something was off with Dante, he asked Anna to assess him and to look into the matter.

Anna will call her contacts at the WSB facility and find out things have changed – a lot! She will find out Dr. Kirk recently died, and they have had a change in personnel, specifically over Dante’s case and also over the case of a man from Port Charles with a brain tumor. She will quickly deduce that man is Franco! However, she cannot get the WSB to tell her who the doctor is.

That is where her fiancé, Dr. Hamilton Finn (Michael Easton) will come in. He can look in the General Hospital computerized case files to confirm that Franco is indeed receiving treatment for his brain tumor – at GH! However, he is not familiar with the doctor named. Liesl, of course, has gone under an alias. She has had to hack into the computer system of General Hospital and create an identity for herself and transfer the records from Geneva. Finn is suspicious, because the treatments mentioned are quite unorthodox – possibly even experimental!

Some of it involves memory transfer procedures and hypnosis, which don’t go along with treatment for a brain tumor. Anna says it sounds like the work of Dr. Arthur Cabot (Time Winters) who performed the memory transfer between herself and her twin Alex Marick (Finola Hughes)! Anna, like Finn, is shocked! They have to find out exactly who this new doctor is and what exactly is being done to Franco!