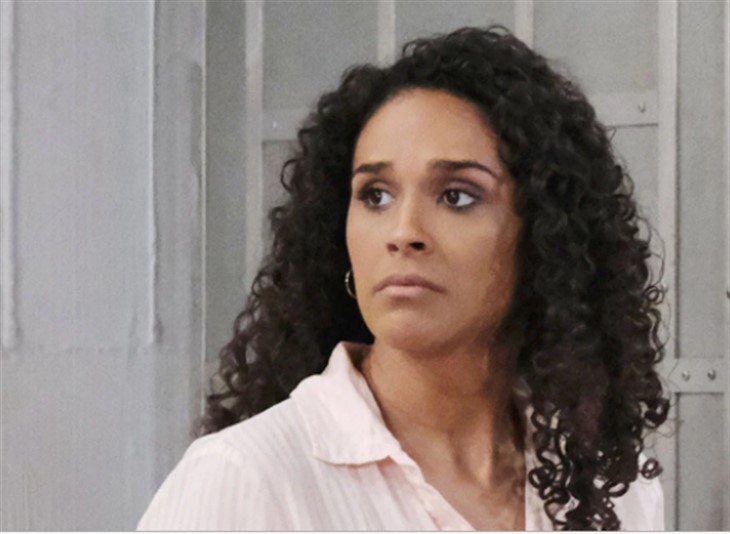 General Hospital (GH) spoilers reveal that Jordan Ashford (Briana Nicole Henry) has lost just about everything: her son, her husband, her self-respect, and her credibility. All she really has to show for months of double-dealing is her prisoner, ex-partner Marcus Taggert (Real Andrews).

Taggert also has nothing. Everyone is mad at him for being alive (huh?) and he’s a marked man. It’s almost a certainty that these two people who have nothing more to lose connect and make the most of a bad situation. The only question is, how soon do they throw the pity sex party?

For fans who watched her son TJ Ashford (Tajh Bellow) turn on her instead of his girlfriend this week, it was heartbreaking. Proving he’s a knucklehead twice over, TJ blamed his mom for Molly Lansing (Hayley Pullos) cheating on him. He doesn’t have the bolts to blame her, so he instead blamed someone who would take his rants, poor Jordan.

TJ couldn’t yell loud enough about how much he blames her for dimwit Molly sleeping with another man while he was kidnapped. He doesn’t know if he can forgive her, but he ran to Molly and said let’s take it one day at a time. Clearly, the fool deserves the next idiocy that Molly dishes out to him.

Based on the weeping and wailing Taggert’s loved ones went through after his faked death, you would think they would welcome him with open arms after the whole cockamamie ruse was exposed. Nope. His daughter Trina Robinson (Sydney Mikayla) is hating on him and his ex Portia Robinson (Brook Kerr) thinks he’s the worst dad ever. Never mind that he faked his death to save both of them from the baddest man in town Cyrus Renault (Jeff Kober).

General Hospital Spoilers: Can TJ and Molly Get Past Her Night With Brando Corbin? Vote Now! https://t.co/pJuZ9WAaMd

Curtis Ashford (Donnell Turner) hates both his wife Jordan and rival Taggert and he looks to have a stubborn streak a mile wide. Jordan will be spending her nights alone, while Taggert languishes in a jail cell–or not. What are the chances he slips out and finds himself alone with Jordan? She can also bust him out, and make him invisible. There is a mad spark between them and it looks like the writing is on the wall for a hot hookup!