The Bold And The Beautiful Spoilers Next Week: Steffy Gets Sneaky, New Tactic To Keep Liam Quiet 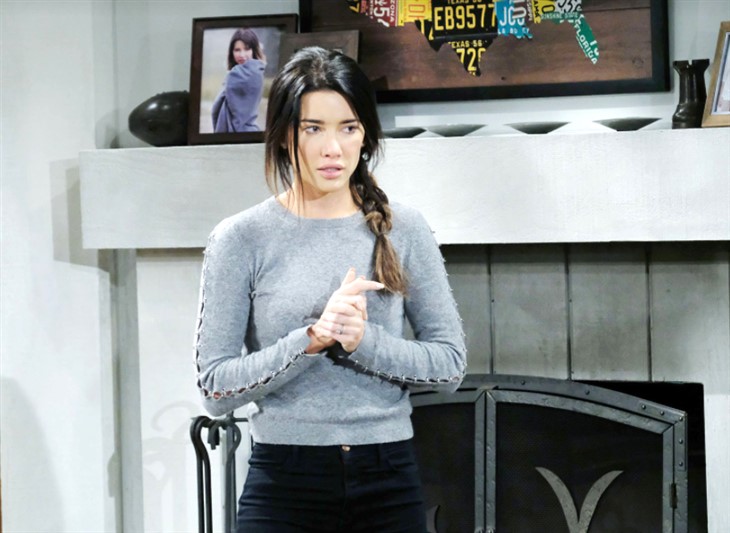 The Bold and the Beautiful spoilers for the week of January 4 reveal that In Los Angeles Steffy Forrester (Jacqueline MacInnes Wood) is determined to keep her secret. She doesn’t want to lose John Finnegan (Tanner Novlan) and isn’t interested in reigniting her feud with Hope Logan (Annika Noelle). She decides to use a sneaky new tactic to keep Liam Spencer (Scott Clifton) quiet.

The Bold And The Beautiful Spoilers – Liam Spencer Freaking Out

B&B spoilers reveal that Liam has kept quiet about his night of passion with Steffy so far. However, he keeps threatening to tell Hope the truth, which wouldn’t just affect his relationship. Once Hope found out, Finn would be next and Steffty doesn’t want to lose him. She has been having some tense arguments with Liam about what they should do. In fact, Hope walked in while “Steam” yelled at each other about the secret.

During the week of January 4, Steffy will realize that Liam is getting close to breaking. She becomes desperate to keep everything the way it is. She wants Liam and Hope to stay together. Likewise, she wants to continue her relationship with Finn. Everything is going so well right now and she can’t bear the thought of losing Finn because of one mistake with Liam. However, she can see that Liam is cracking under the pressure, so she brainstorms a new plan to keep him quiet.

The Bold And The Beautiful Spoilers – Steffy Forrester’s New Tactic

The Bold and the Beautiful spoilers from TV Guide confirm that Steffy will use a new tactic on Liam. She has tried threatening him, using the fear of losing Hope against him, and has even resorted to begging. She even tried using the children to keep Liam quiet. But none of those are really working, so she decides to try something different. Something that Liam won’t expect. It’s a big risk, but Steffy feels that desperate times call for desperate measures.

It is teased that Liam and Steffy get ready to do the right thing. So, is Steffy’s new tactic reverse psychology? Does she tell Liam that they need to confess the truth to Hope and Finn? It certainly seems like it.

However, spoilers indicate that as Liam is about to confess, someone makes a statement and it stops him in his tracks. Could Steffy bring up with Hope all those times they fought over Liam and how glad they are it’s over now? How it’s so nice to actually be friends instead of enemies? That might be enough to get Liam to keep quiet. However, secrets never stay buried forever in soaps. This will only buy Steffy time, but the truth will eventually come out and there could be harsh consequences.