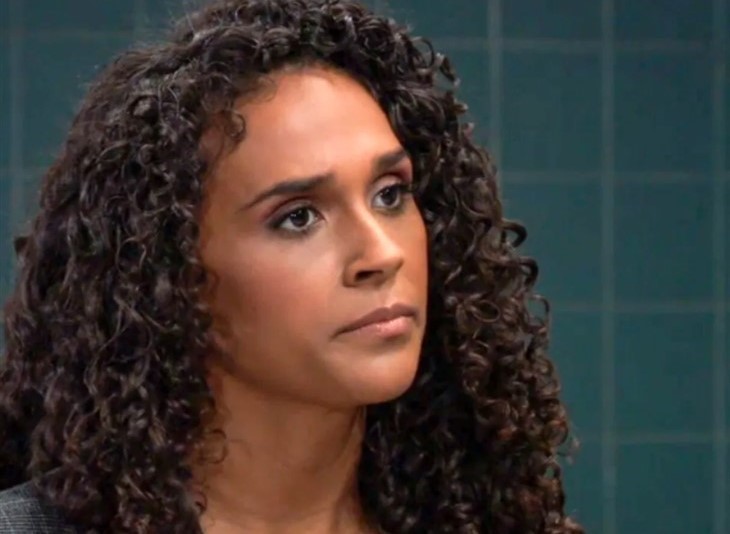 General Hospital (GH) spoilers indicate that after months of lying to everyone she loves, the truth is finally catching up to Jordan Ashford (Brianna Nicole Henry). As viewers know, Jordan has been under Cyrus Renault’s (Jeff Kober) thumb. Years ago, Jordan and three other undercover agents including Marcus Taggert (Real Andrews) fabricated the evidence that put Cyrus in prison. Cyrus was actually guilty of those crimes but Jordan and the other could never get the real evidence. So in order to save lives, they did what they had to in order to stop Cyrus.

But when Cyrus’ men kidnapped TJ Ashford (Tajh Bellow), Jordan’s son, Jordan was forced to get Cyrus out of jail by any means possible. This meant she had to turn on her fellow agents by revealing that they had faked the evidence but leaving her own involvement out of the story.

According to General Hospital spoilers, the plan worked, but Jordan, the Police Commissioner, was now under Cyrus complete control. In addition to this, Jordan helped Taggert fake his death so that Cyrus wouldn’t kill him or go after Trina Robinson (Sydney Mikayla), Taggert’s teenage daughter. For a long, while Jordan kept her loved ones, including Curtis Ashford (Donnell Turner) in the dark about her involvement with Cyrus even as she did things for Cyrus that made no sense to them.

GH Spoilers – Curtis Ashford Was Kept In The Dark

Eventually, Jordan confessed part of the truth to Curtis but left out the part about Taggert’s faked death even after she swore that there were no more secrets. But now that Taggert has been exposed and everyone knows that he is alive, General Hospital spoilers show Taggert has had it.

He angrily stormed out, and can’t seem to forgive Jordan. He isn’t upset about the things that she did as much as the fact that she couldn’t, or wouldn’t trust him with the truth. It’s unclear at this time if they will eventually be able to work through these issues, but it seems unlikely at this point. But Curtis isn’t the only one who is tired of Jordan and her secrets.

TJ also finally figured out that his mom knew that he was abducted the entire time he was missing. In order to keep TJ’s girlfriend Molly Lansing-Davis (Haley Pullos) from sticking her nose into TJ’s abduction. She lied to Molly and told her that TJ didn’t want anything to do with her anymore. This led to Molly sleeping with Brando Corbin (Johnny Waycor) on General Hospital. Molly confessed the truth to TJ on Christmas. When TJ found out what Jordan had said to Molly, he also stormed out on Jordan, leaving her alone on Christmas.

For now, Jordan is still the Police Commissioner but Mayor Laura Collins (Genie Francis) has indicated that after Cyrus is dealt with, that there will be ramifications to Jordan’s actions. Laura was understandably angry when Jordan told her what she had to do to save TJ’s life. Whether or not, Jordan is fired as Police Commissioner or even has to face prison time, is up in the air at this point. Laura will do what’s right for Port Charles, and that will likely mean Jordan will also lose her job.

Will Curtis and TJ eventually forgive Jordan for her many lies and secrets? Will Laura have no choice but to fire her? Could Jordan actually end up in prison? Secrets always come out in Port Charles so stay tuned to General Hospital airing weekdays on ABC. And don’t forget to check back here regularly for all your General Hospital news, soap opera cast information, and new GH episode spoilers.