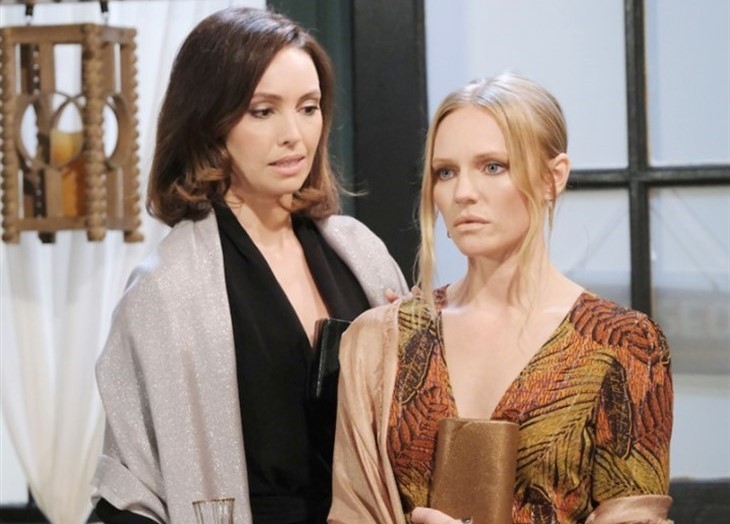 Days of Our Lives spoilers reveal that in Salem Gwen Rizczech (Emily O’Brien) doesn’t keep her promise. She betrays Chad DiMera (Billy Flynn) and tells Abigail DiMera (Marci Miller) that she bedded her husband. Chad desperately tries to “explain” what happened to his wife, but his attempt at damage control fails.

DOOL spoilers reveal that Chad made a huge mistake and slept with Gwen. Even though he thought his wife was having an affair with Jake Lambert DiMera (Brandon Barash), he finds out the next day that Gwen lied. He should have told Abigail the truth right then and there, but he didn’t. Instead, he made a deal with the devil so Gwen could remain in the mansion despite being fired.

Chad confides in Kate Roberts DiMera (Lauren Koslow), who tells him to be truthful with his wife and to do it quickly. She has a feeling that Gwen is getting ready to expose the secret to Abigail. It will be much worse if it comes from the ex-nanny and not the husband, but it seems that Chad is too late. According to TV Guide, Gwen ends up telling Abigail that she slept with Chad the night of the New Year’s Eve ball.

Days Of Our Lives Comings And Goings: Ava Vitali’s Family Arrives And Will Horton Leaves

Days Of Our Lives Spoilers – Abigail DiMera Filled With Rage

Days of Our Lives spoilers reveal that Abigail is furious and reacts with rage. It probably takes every ounce of willpower not to murder her former nanny. Chad tries to do damage control and explain what happened that night, but Abigail is not interested. She doesn’t want to hear any excuses, leaving Chad wondering if his marriage is over.

Even though Gwen thinks that Abigail’s marriage is toast, she also doesn’t know the couple very well. They have been through countless obstacles and drama, surviving each and every one of them. So, they could overcome this or it could be the final straw. Some fans believe they’ll find their way back to each other and that’s possible. Of course, Chad will have to stop throwing Stefan DiMera in Abigail’s face all the time.

Meanwhile, Abigail teams up with Jack Deveraux (Matthew Ashford) and Jennifer Horton (Cady McClain). They piece together information on Gwen and Kate tries to get the schemer to talk. However, she remains secretive and vague about her motivations and what she’s trying to accomplish. It seems that Gwen will only drop a little bit of information at a time, leaving much of it a mystery. The question is for how long will the Deveraux family remain clueless about Gwen’s reason for doing all of this? Shouldn’t the truth just come out now so the manipulator can be dealt with?