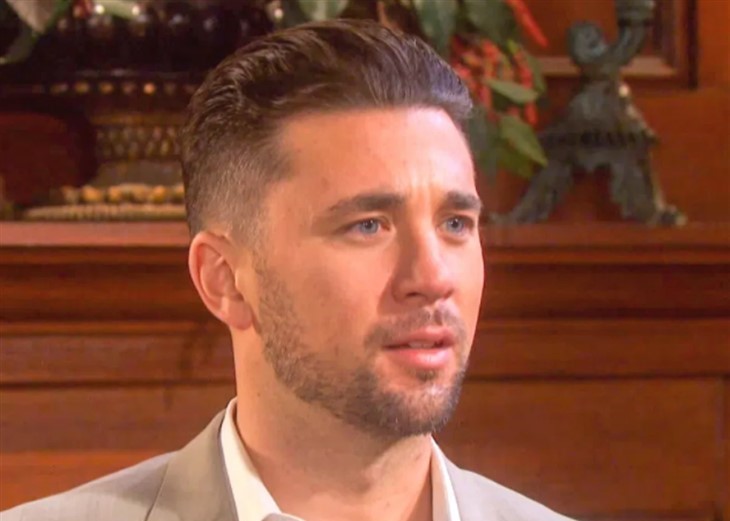 Days of Our Lives spoilers reveal that Chad DiMera is not the same man that viewers are used to seeing. A lot of fans are straight up asking what is wrong with him and finally, actor Billy Flynn has an explanation. He says that with everything that has happened with Abigail DiMera (Marci Miller) the past few years, Chad is simply lost and confused.

DOOL spoilers reveal that Chad and Abigail have always had their issues. However, Chad really spiraled downhill when Abigail faked her death with the help of her unlikely BFF, Andre DiMera (Thaao Penghlis). While everyone thought she was dead, Abigail was really with Laura Horton (Jamie Lyn Bauer), who was treating her mental illness. When Abigail suddenly came home, Chad had already moved on with Gabi Hernandez (Camila Banus).

Another troubling storyline with Abigail was when her dissociative identity disorder (DID) was at its peak. One of her alters mimicked Gabi and fans dubbed her “Gabigail.” She was a completely different person and was very devious. That led to her getting a bit too close to Stefan DiMera (Brandon Barash).

It also led to Abigail murdering Andre and even lying on the stand in court. That resulted in Gabi going to prison for a crime she didn’t commit and the brutal beating by fellow inmates nearly killed her and rendered her infertile.

Days Of Our Lives Spoilers – Affair With Stefan DiMera

Days of Our Lives spoilers reveal that Stefan wanted to keep Abigail mentally ill because that is the only way she would be with him. The real Abigail would not have betrayed Chad and wasn’t interested in Stefan. However, “Gabigail” was and Chad actually caught them in bed together.

Even though Chad knows it wasn’t the real Abigail, that doesn’t erase what he saw. The fact that he keeps bringing up Stefan and Abigail’s affair, as well as being paranoid about Jake Lambert DiMera (also played by Brandon Barash) just shows Chad hasn’t recovered. That’s why it was so easy for him to believe Gwen’s stories about Jake and Abigail.

Then, Abigail was drugged with a powerful hallucinogen that brought her psychosis back with a vengeance. Abigail had to go away to Florida for treatment and Gabi was blamed for it. But now we know it was actually Gwen Rizczech (Emily O’Brien), who was told by Dr. Wilhelm Rolf (William Utay) that the drug would melt Abigail’s brain. Obviously, her brain was not melted and she was able to recover. But when Abigail suddenly came back to Salem, Chad wasn’t expecting her. He probably wasn’t ready to face or deal with more of Abigail’s mental problems.

Speaking to Soap Opera Digest, Flynn explained what is going on with Chad. The actor indicated that Chad is just lost and all of the issues with Abigail the past few years are simply too much.

Days Of Our Lives Spoilers: What Was the Worst DOOL Hookup Of 2020? Vote Now! #Days #DOOL #DaysOfOurLiveshttps://t.co/ogAZRBcyrP

“With everything that’s gone on the last couple of years with Abigail and the DID and Stefan, the dude is lost. And I think he’s so confused about what’s right and what’s wrong and what to believe and who to believe, and I believe he feels so inadequate in dealing with the situation… Chad is a lost soul, and there are people who make him feel like they will take care of him or comfort him, and Gwen is that person…”

It seems that even though Chad loves Abigail and has tried to move on, he can’t forget everything that happened. Sometimes, love just isn’t enough.