Days Of Our Lives Spoilers: Anna And Abigail Find Evidence Gwen Is A Sick Stalker In Her Bedroom 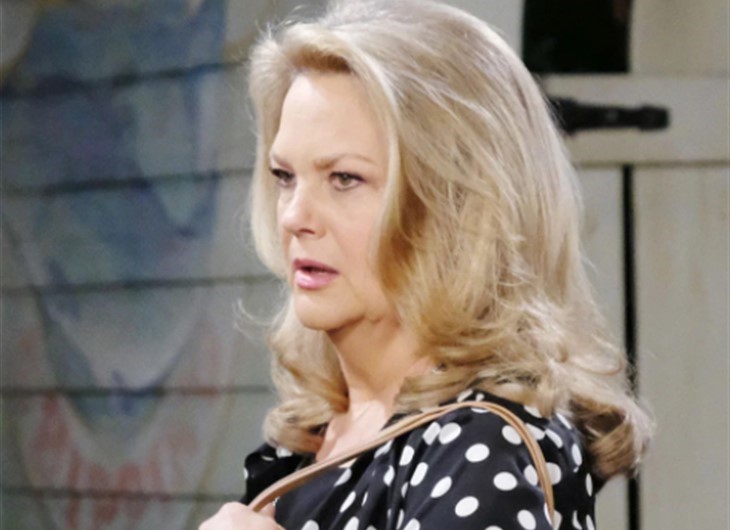 Days of Our Lives spoilers tease that in Salem Anna DiMera (Leann Hunley) and Abigail DiMera (Marci Miller) will find evidence that Gwen Rizchech (Emily O’Brien) is a sick stalker in her bedroom on an upcoming episode of Days of Our Lives!

Anna DiMera was suspicious of Gwen Rizchech the moment she laid eyes on her! Yet, she was very friendly towards her and invited her to sit down on the couch with her in the DiMera living room and tell her about herself. Gwen obliged but seemed very nervous. Anna seemed to know her from somewhere and Gwen knew it! Anna’s been all over the world and could have seen Gwen anywhere.

When Anna and Tony DiMera (Thaao Penghlis) arrived, Gwen tried to make herself scarce but as she quickly found out, there is no hiding from Anna! It would seem that Gwen thought that either Anna or Tony might recognize her and she didn’t want to be seen! But after Anna talked to Gwen for a while, she knew there was something off – Gwen was not very forthcoming, and that is a sure sign that someone is hiding something. When Anna thinks someone is hiding something, she is like a dog hunting a buried bone and she won’t give up until she finds it!

Anna knows that Gwen is after something in the DiMera/Deveraux family and she realizes Gwen is very dangerous! She watches Gwen very carefully as often as she can in order to try and get a handle on exactly what – or who – she might be after. She tries to not let Gwen see her but as she spots her around the DiMera mansion it becomes obvious. She warns Abigail that Gwen is a psycho and she’s obsessed with her family!

Anna and Abigail talk about the things that have happened since Gwen moved into the DiMera mansion. Abigail tells Anna her parents, Jack and Jennifer Deveraux (Matthew Ashford, Cady McClain) moved in while she was in treatment in Florida, to help take care of the children. Chad DiMera (Billy Flynn) needed someone to be on-site so he could fly to Florida and visit her frequently. Since that time, and particularly since Abigail came back and hired Gwen formally as the nanny, strange things have happened.

Abigail got an expensive piece of jewelry for Christmas from Jake Lambert (Brandon Barash) meant for Kate Roberts (Lauren Koslow). It was Gwen who had wrapped the gifts and handed them out. It was Gwen who talked Abigail into going into Kate’s room to borrow a pair of shoes for Jack and Jennifer’s anniversary party and managed to dump a box of Kate’s personal things on the floor. Abigail rather conveniently found a letter from her father to Kate, showing that he had a one night stand with Kate when her mother was still in a coma! She was so upset she read it out loud, effectively destroying her parents’ marriage, at least for the time being. Anna said that sounds like a pattern!

At a time when they know that Gwen will not be home, they go into her bedroom and start rifling through drawers. They hit paydirt; a box full of clippings about various members of the DiMera family and the Deverauxs as well! The obsession is obvious, and there are clippings going back years even to when Harper Deveraux (Joseph Campanella), Jack’s adoptive father was still alive! Abigail asks Anna if she should call the police; Anna says since so many clippings are about Jack although there are plenty of them about all of the DiMeras including Tony, not to. Anna wants to give Tony and Jack a chance to look at them first!