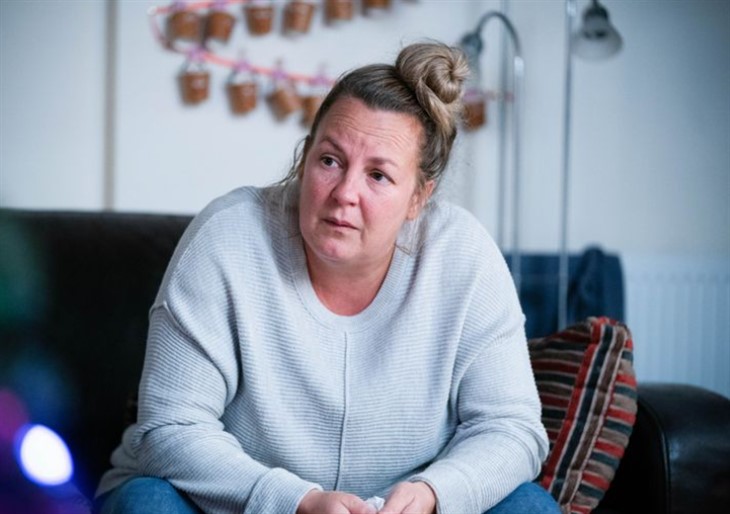 Eastenders spoilers reveal that in Walford Gray Atkins (Toby-Alexander Smith) tries to get his kids back. However, Karen Taylor (Lorraine Stanley) insists on being there to care for them full-time. Gray gets further agitated when Karen starts making decisions without consulting him. With two women already dead, could Karen be his next murder victim? Keep reading to get all the details.

Eastenders spoilers reveal that now that Tina Carter (Luisa Bradshaw-White) is out of the way, Gray wants his children back. He goes over to Karen’s house to inform her of the change. However, he doesn’t expect a fight on his hands, but that’s exactly what he’s getting. Of course, Karen doesn’t mean anything by it and just wants to stay involved with the children’s lives. After all, it fills the void in her heart since Chantelle Atkins (Jessica Plummer.)

Karen offers to take care of the children full-time, but Gray says no. He explains he is perfectly capable of taking care of his own children. Karen doesn’t accept this and tells him that she already made the promise to the kids, so it’s settled. Even though his blood is boiling, he manages to hide his anger. However, he is left with a dilemma on his hands. He doesn’t want Karen around more often.

As fans know, Gray is responsible for the death of his wife, Chantelle. There are a few people who suspect he may have been involved, but it can’t be proven. Plus, the police investigated and closed the case. More recently, Tina found out that Gray killed Chantelle and was going to expose his secret. To prevent that from happening, he murdered for a second time. Now fans are concerned that he could strike again.

Eastenders spoilers reveal that the more times Gray takes a life, the easier it will become for him. There is a real concern that he could decide to get rid of his new problem, which he considers to be Karen, by killing her. However, will she really meet her demise? Or could Gray be exposed before then? Producer Jon Sen told Digital Spy,

“One of the big moments of last year was the death of Chantelle and everybody’s asking the question of when Gray will receive his comeuppance/ The soap gods never forgive something like that and we need to see Gray pay, but I’m going to keep when that’ll happen close to my chest but it’s something we’ve talked about a lot.”

What do you think is going to happen with Gray Atkins and Karen Taylor? Is her life in danger now or will she be one of the lucky ones? We will have to keep watching the soap to see how this storyline develops.