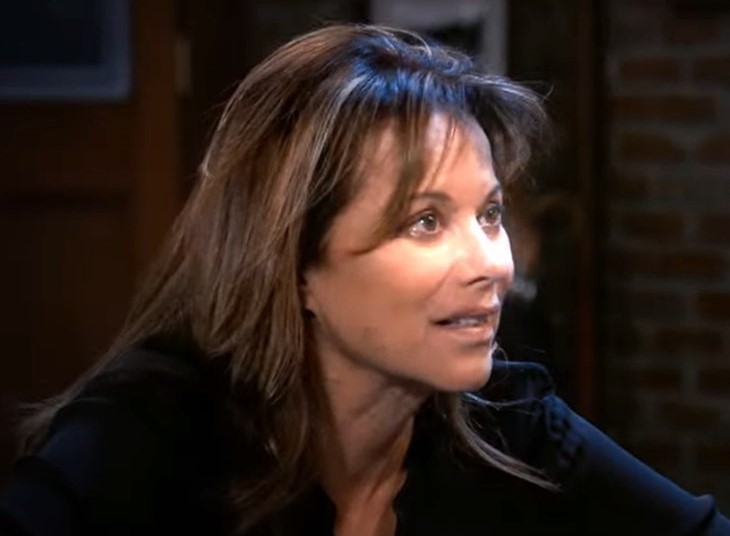 General Hospital viewers will recall that Alexis found out about the death of her ex in the cruelest way possible – a news story in “The Invader”! The news story came upon her device as she had just been kicked out of Jordan and Curtis Ashford’s (Briana Nicole Henry, Donnell Turner) home when Molly Lansing-Davis (Haley Pullos) caught her drinking vodka out of a coffee cup! Alexis may pretend it didn’t bother her, but it was obvious that she was affected deeply by the news, especially when she saw it was mob-related.

Julian had talked to her a couple of weeks previous to his death, and she thought he was just leaving town, noting to him it sounded like a goodbye. They were still friends, although they never did reconcile as lovers. Soon after his death, once the morgue releases his body, a funeral or burial will need to be held, or perhaps a cremation depending upon his final wishes.

A will readING may need to happen as well. Poor Alexis hasn’t even gotten over the death of Neil Byrne (Joe Flanigan) yet, who died of a probably staged drug overdose in her bed. At least Julian hadn’t spent the night over at her place when he died! It may be at a reading of Julian’s will that Alexis receives that painful reminder of his death – or else she may be called on to conduct the reading.

GH Spoilers – Did Julian Jerome Ever Revise His Will?

It is certain that when Julian and Alexis were still married, he would have had a will. Alexis was an attorney and she would have made sure of that. Whether he ever revised it after the death of Nelle Benson Jerome (Chloe Lanier) is uncertain, although it is a sure bet that she may have tried to revise it for him if she knew he had one!

She would have wanted to make herself an heir to any wealth she may have thought he had stashed away, although Julian’s only asset by that time was Charlie’s Pub. He didn’t have any mob money stashed away anywhere that anyone knew of! It was plain to see that Julian still had feelings for Alexis deep down, even though he had tried to move on with Kim Nero (Tamara Braun).

One would think that he would have revised his will long since his marriage to Alexis ended. He has a son with Olivia Quartermaine (Lisa LoCicero), Leo Falconeri (Aaron Bradshaw). He probably has another one with Kim as well, although he was led to believe her baby boy was Franco Baldwin’s (Roger Howarth) from when Drew Cain’s (Billy Miller) memories were active in him. Well, MORE active, anyway! Considering Alexis lost her law license, she probably won’t be called on to conduct the reading of Julian’s will, but she may be included in it. The most painful reminder she could receive of his death would also remind her of the death of their failed marriage – his wedding ring.