The Bold And The Beautiful Spoilers: What Does 2021 Bring For Brooke, Steffy, And Wyatt? 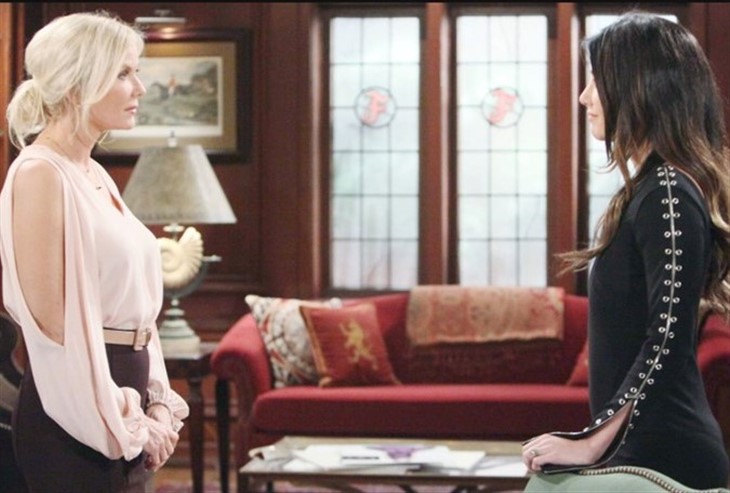 The Bold and the Beautiful spoilers and updates show Brooke is still basking in the glow of the reclaimed Bridge, as Ridge Forrester (Thorsten Kaye) remains her husband. Steffy believes she’s avoided a calamity in convincing Liam Spencer (Scott Clifton) to not share his latest emotional thought. And, Wyatt is now looking solely at the greatly appealing Flo Fulton (Katrina Bowden) at the beach house.

Ridge now knows that Quinn Fuller Forrester (Rena Sofer) was the negative force that upended Bridge and enabled his farce of a marriage to Shauna Fulton (Denise Richards). However, Quinn was not responsible for Brooke attacking Queric, inserting herself into Thomas Forrester’s (Matthew Atkinson) life, and kissing Bill Spencer (Don Diamont).

B&B’s greatest of the all-time couple has the opportunity to live an enjoyable, generally peaceful life if Brooke is able to exhibit self-awareness. Maintaining control of herself means that she’ll avoid impulse involvement in the lives of nearly every other character on the show, which often leads to trouble.

John Finnegan (Tanner Novlan) might be the best person Steffy has ever met. For one thing, he’s not Liam. While Clifton’s character is a good guy, he’s far too flighty, which generates needless turmoil in the lives of those he’s connected to.

For another thing, Finn hasn’t been part of the famous checkered triangle, which is occupied by Steffy, Liam, and Hope Spencer (Annika Noelle). That alone gives Novlan’s character a much better opportunity to sustain a lasting relationship with Steffy, though Liam will remain her self-appointed overlord.

Flo is a kind-hearted soul. That’s why she didn’t think about the consequences when asking Quinn to move in with her and Wyatt following the fallout with Eric Forrester (John McCook).

Wyatt suffered the death of many delicious doughnuts at the hands of his mom, who trashed countless food circles for no good reason. That and the lack of privacy made Quinn’s tenure at the home Bill graciously gifted to their son thankfully short.

Brooks’ character should follow Quinn’s exit by asking Flo to marry him and then complete the ceremony as soon as possible. His high school sweetheart is a true keeper and hopefully the mother of Quinn’s grandchildren.

HH is a leading source for everything linked to The Bold and the Beautiful. Check back regularly for B&B spoilers, CBS comings and goings updates, and soap opera news!