The Bold And The Beautiful Spoilers: How Far Will Steffy Go? Makes Finn The Baby Daddy 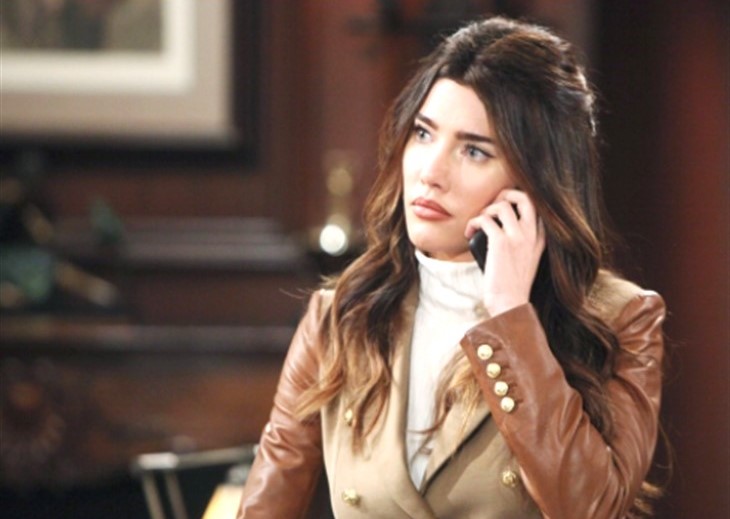 The Bold and the Beautiful spoilers reveal that in Los Angeles Steffy Forrester (Jacqueline MacInnes Wood) told Liam Spencer (Scott Clifton) that there is “only one way” this pregnancy can go. She said John Finnegan (Tanner Novlan) “has to be” the father. So, how far will she go to make sure that happens?

The Bold And The Beautiful Spoilers – Telling Liam Spencer

B&B spoilers reveal that on Friday’s episode, Steffy called Liam and asked him to come over. She had something important to talk to him about, but said it wasn’t about Kelly Spencer (Colette and Avalon Gray). Steffy told him that she was pregnant, but we didn’t see his reaction until Monday’s episode. While he’s panicking about what to do, Hope Logan (Annika Noelle) is talking to Thomas Forrester (Matthew Atkinson) about what “Steam” could be discussing. Well, she will soon find out.

Even though Steffy knows that secrets never stay buried forever, she still doesn’t want Hope to find out the truth. Right now, Steffy isn’t sure how to handle this situation. Steffy and Hope went through a war for a long time over Liam. Now they are in a good place and could almost be considered friends. This will destroy all of that, not to mention it will affect Ridge Forrester (Thorsten Kaye) and Brooke Logan Forrester’s (Katherine Kelly Lang) relationship.

The Bold And The Beautiful Spoilers – Steffy Forrester’s Desperation

The Bold and the Beautiful spoilers reveal that Steffy looked and sounded pretty desperate. Just the way she said “there’s only one way this can go” and “it has to be Finn’s” indicates she won’t accept any other outcome. So, just how far will Steffy go to make sure that Finn is the father? Well, she has to make sure that Liam doesn’t say anything to Hope, but we already know the secret is exposed next week. While the cheating secret is exposed, nothing was said about paternity.

Head writer Bradley Bell told Soap Opera Digest that throughout most of this year, the “Steam” story will still be a major focus. He also said that it will involve three families: the Spencers, the Forresters, and the Logans. With SOD writing that Steffy’s baby is due in summer 2021, that means we are probably going to get a paternity bombshell shortly after the baby is born.

Now, will Steffy just eliminate Liam from the equation and pretend she didn’t sleep with him? That certainly is possible. In fact, if Hope ever questions if her unborn baby could be Liams’ once the secret is out, Steffy could lie. She could say that she conceived before sleeping with Liam. But the truth always comes out and we have a feeling this story is far from over.

Be sure to catch up on everything happening with B&B soap right now. Come back here often for The Bold and the Beautiful spoilers, news, and updates.