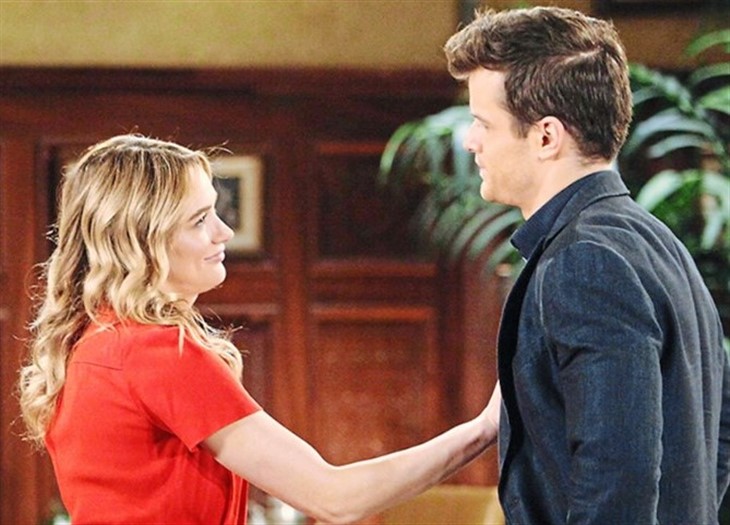 The Young and the Restless spoilers document that in Genoa City, Wisconsin Summer Newman (Hunter King) and Kyle Abbott (Michael Mealor) are teased to crossover to The Bold and the Beautiful during the week of January 11. Summer’s aim is to seek needed intel regarding Sally Spectra (Courtney Hope).

A number of potential outcomes can be realized through Skyle’s efforts. The characters they meet with and what is revealed will prove key to whatever Sally’s future may, or may not be in Genoa City, Wisconsin.

The Young And The Restless Spoilers – Sheila Carter She’s Not

The most infamous crossover between these sister soap operas happened many years ago with one of daytime greatest villains, Sheila Carter (portrayed by the great Kimberlin Brown). As hardcore Y&R fans recall, Sheila first appeared in GC in 1990.

Sheila eventually became Lauren Fenmore’s (Tracey Bregman) rival. Brown’s character went berserk, as part of a baby steal storyline, and was thought to have died in a fire. She lived, relocated to Los Angeles, California, began to work for the Forrester family as a nurse, and ingratiated herself into that world in 1992.

There were eventually cross-backs, with Sheila last being seen on B&B in 2018. Unusually, Eric Forrester (John Forrester) is never known to have told Lauren that Sheila was with him in modern times, as she was believed to have been killed years before in GC by Bregman’s character.

Summer is heading to LA with Kyle intending to learn Sally’s backstory. As B&B fans know, any tales told of her design talent won’t be a problem. But scenes that show Bill Spencer (Don Diamont), Wyatt Spencer (Darin Brooks), and Flo Fulton (Katrina Bowden) are ominous.

Bill despises Sally and will surely be open to dishing the dirt on the woman who once shot his prized vanity corporate building model, Sky. But Bill can’t deliver the type of goods to Summer as Wyatt and Flo can.

Wyatt still retains a sense of regret for how badly things went between him and Sally. But Flo has no such qualms, as she was knocked unconscious by Hope’s character, which was part of Sally’s failed plot to regain Wally.

And, of course, Skyle will be shocked to learn that Sally initially faked her death, before pursuing the panicked plot where she kidnapped Flo.

The Young And The Restless Spoilers – Sally Spectra To Cross-Back Soon?

Summer and Kyle will return to GC armed for battle, assuming the Skyle learns some decent tidbits about Sally’s past. At that point, Lauren will have to reconsider if faith in her new protege is wise. If not, Sally could be forced to flee another town.

The idea of returning to LA would seem to be a non-starter. But Sally is a fighter, like others in her famous B&B family. So, fans of both shows will soon know what results from the latest crossovers that are about to happen.