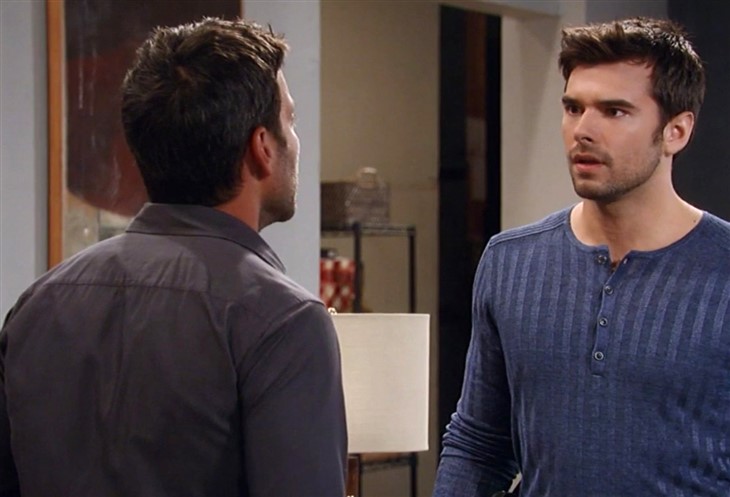 General Hospital (GH) spoilers tease that in Port Charles, NY former partners Harrison Chase (Josh Swickard) and Dante Falconeri (Dominic Zomprogna) haven’t had much of a chance to reconnect since Dante returned to town several weeks ago. But at one point, the two of them were close. Could Chase be the one to realize that something isn’t quite right with Dante? As viewers know, Dante is under the sway of Dr. Leisl O’Brecht (Kathleen Gati) in her quest to destroy Peter August (Wes Ramsey).

General Hospital Spoilers – Harrison Chase Could Use A Friend.

Chase has had quite a lot to deal with in recent months and having Dante around might ease some of the strain he’s been under. Chase faked an affair with Sasha Gilmore (Sofia Mattsson) in order to push Michael Corinthos (Chad Duell) and Willow Tait (Katelynn MacMullen) together. Chase had no one to talk to during that time because not only did he lose Willow but his best friend Michael as well. If Dante had been around, Chase may not have made the choices that he did. Dante might have provided a voice of reason that Chase desperately needed to hear.

Dante returned to Port Charles a couple of years ago after a WSB assignment. But when he returned, something wasn’t right. It wasn’t long before it was discovered that Dante had been brainwashed and could become violent when triggered. In order to protect his family, Dante volunteered for treatment. He divorced Lulu Falconeri (Emme Rylan) and left town. He returned a few weeks ago, believing the brainwashing to be gone from his psyche. But he can still be triggered by the click of a pen.

Dante has already gone through quite a bit since returning to town. Lulu was injured in the explosion at the Floating Rib and suddenly Dante is a single father at least until she recovers. It may not be easy to see Dante is still under the sway of someone, but maybe if Chase and Dante connect, he might see a change that no one else could. Chase might be the one person who can get through to Dante right now. Hopefully, they will come into contact soon.

Will Chase and Dante reconnect soon? Can see that something isn’t quite right with Dante? Or will O’Brecht continue to control Dante? Only time will tell, so stay tuned to General Hospital, airing weekdays on ABC. And don’t forget to check back here regularly for all your General Hospital news, information and spoilers.