General Hospital Spoilers: Jordan Pushed Cyrus Too Far, How Will He Get Her Back In Line ? 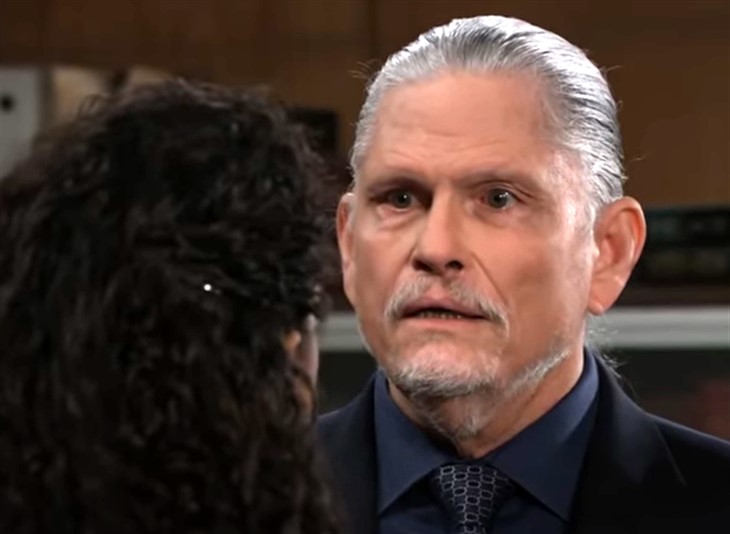 General Hospital (GH) spoilers tease that in Port Charles, NY for over a year now, the threat of Cyrus Renault (Jeff Kober) has hung over Jordan Ashford’s (Brianna Nicole Henry) head. He kidnapped her son, TJ Ashford (Tajh Bellow) to force Jordan to get him out of prison.

She managed to make it happen, and TJ was released, though he had been severely beaten. Even worse, after that Jordan was basically obliged to do Cyrus’ bidding. At least, until now. After her loved ones pretty much walked out on her, Jordan seems to feel she has nothing more to lose. But is that true?

In an extremely risky move, Carly Corinthos (Laura Wright) kidnapped Florence Grey (Annie Abbott) from the nursing home the elderly woman had been staying at. As predicted, Cyrus was incensed and he demanded Jordan, as Police Commissioner, intervene with Carly and Jason Morgan (Steve Burton). But Jordan has finally had enough and turned Cyrus down flat. Cyrus is a bit preoccupied with getting Florence back safe and sound, but he certainly won’t forget Jordan’s “betrayal”.

GH Spoilers – Cyrus Renault Will Certainly Get Back At Jordan Ashford!

Cyrus might take Jordan’s husband, Curtis Ashford (Donnell Turner). Even though they are estranged currently, Jordan still loves her husband, which makes him a likely target for Cyrus. The same thing goes for TJ. There is nothing to stop Cyrus from kidnapping, or even killing either one of them. So while telling Cyrus off may have felt good, it seems as though Jordan is playing with fire. Cyrus may go ahead and decide Jordan is no more used to him, so killing her maybe his preference.

General Hospital Spoilers – Will Jordan Ashford Die Because Of Her Defiance?

If Cyrus does take Jordan out, it will only be because Jordan is of no more use to him. The fact that she is refusing to obey his whims means that time may have just come. Her death would certainly hit both Curtis and TJ hard, as they have both pretty much walked out on Jordan. But if she does die, at least she wasn’t under Cyrus’ control any longer.

Was it about time for Jordan to stand up to Cyrus? Or has she pretty much signed her own death warrant? What about Curtis or TJ? Will Cyrus retaliate now that Jordan seems to be of no use to him? Anything can happen in Port Charles, so stay tuned to General Hospital airs weekdays on ABC. And don’t forget to check back right here regularly for all your General Hospital news, information, and spoilers!