The Bold And The Beautiful Spoilers: Steffy Isn’t Innocent – Did She Seduce Upset Liam? 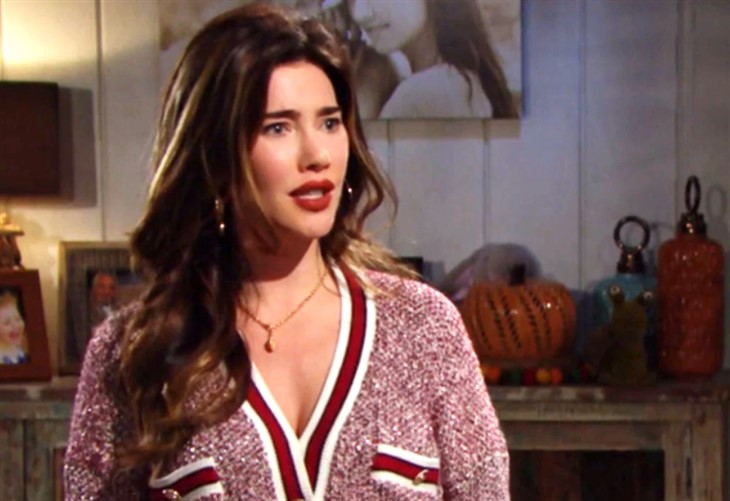 He didn’t force Steffy to do anything that she didn’t want to do. Both halves of the former Steam might be parents to another baby that will be born approximately next August on B&B.

The Bold And The Beautiful Spoilers – Liam Spencer Initiated Situation

Liam chose to go to the cliff house after he saw Thomas Forrester (Matthew Atkinson) kissing Hope Spencer (Annika Noelle). However, as Hope was explaining to Thomas this week, Liam actually saw Thomas kissing the mannequin.

The Bold And The Beautiful Spoilers: Steffy Tries Confessing, But Finn’s Words Leave Her Speechless

Clifton’s character came to that conclusion after the fact, while Thomas was recovering in the hospital. But it was too late because Liam realized that his rebound response was to race to Steffy, tell her what happened, and then initiate a romantic reconnection in order to deal with what he assumed was Hope’s betrayal.

One could classify Steffy’s response to Liam as a continued vulnerability to him. In fact, something far more profound and humanly simple is in play, she still loves him more than any other man.

The reason why Steffy responded to Liam’s emotions is that she still wants to be with him. No matter what’s stated in words, the reason why the Steam photo still hangs on the wall in the cliff house living room is that Steffy longs to restart that beloved part of her life.

So, criticizing Steffy for what happened would be overly harsh, as it terming her actions a so-called mistake. Instead, what took place and may come to pass is Steffy’s way of wanting to reclaim the life she, Liam, and Kelly Spencer (Avalon and Colette Gray) created.

The Bold And The Beautiful Spoilers – No, It’s Not A Mistake

Understandable, or not, was it wrong for Liam to betray Hope in the way that he did? Yes, it was. Is the same true for Steffy where John Finnegan (Tanner Novlan) is concerned? Generally, but to a lesser degree because she and Finn aren’t married and have no children together (yet).

So, there is a chance that Steam revives if Steffy’s baby proves to be Liam’s. If the boy or girl proves to be Finn’s, then Sinn becomes a new family.

Liam made a mistake when misinterpreting Thomas’ actions with the mannequin. But Liam knew what he was doing when seeking out Steffy and she agreed to what happened next. Consequences will now follow with either Liam or Finn.