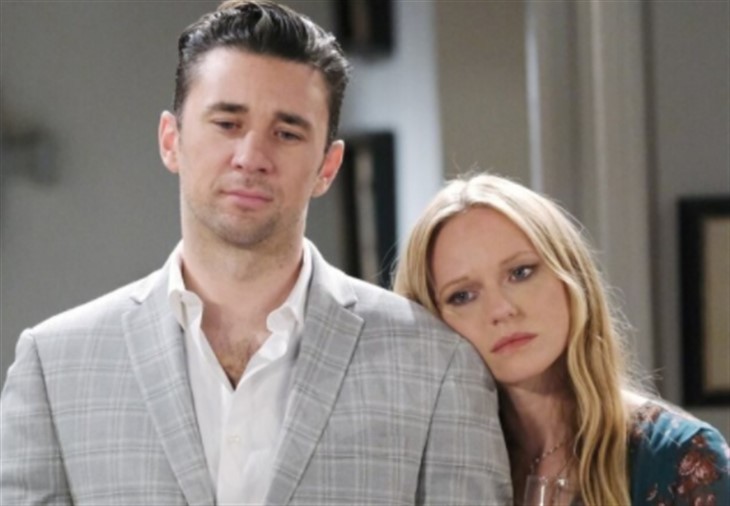 Days of Our Lives spoilers reveal that in Salem Abigail DiMera takes the children and leaves Chad DiMera (Billy Flynn) after the cheating bombshell. However, they have been through tough times before, so could they get back together? Actress Marci Miller teases there is hope, but it will take a lot of time and hard work to repair the damage to their relationship.

DOOL spoilers reveal that Chad is urged by Kate Roberts DiMera (Lauren Koslow) to tell his wife the truth. If he doesn’t, Kate warns that Abigail will find out from Gwen Rizczech (Emily O’Brien). It turns out that Kate’s radar is deadly accurate and Gwen beats Chad to telling Abigail about New Year’s Eve.

Once Gwen tells Abigail how wonderful Chad is in bed, the betrayed wife makes a decision. She can’t be around Chad any longer. Miller confirmed to Soap Opera Digest that Abigail takes the children and leaves her husband.

All of these months, Chad has accused his wife of having an affair with Jake Lambert DiMera (Brandon Barash). Part of him couldn’t let go of what happened during Abigail’s DID storyline, which led “Gabigail” to fall into Stefan DiMera’s (also played by Barash) arms… and his bed! The other part of what led to Chad’s betrayal was Gwen sprinkling all these little seeds in front of Chad. Like a sucker, he took the bait so when Gwen dropped the big bombshell, Chad instantly believed it.

Days Of Our Lives Spoilers – There’s Hope For ‘Chabby’

Days of Our Lives spoilers reveal that Miller told SOD that even though Abigail takes the children and leaves Chad, it seems to be temporary. She specifically used the words “just has to get away” and “needs a moment.” So, that suggests it’s a temporary separation. The actress also told the magazine that there is hope for “Chabby.”

However, it will not happen right away and it certainly won’t be easy. It’s not just Chad cheating on Abigail or Gwen lying to break them up. There is a lot of painful history that came long before Gwen. She was simply able to tap into a pre-existing problem.

Miller said that she has hope for Chad and Abigail, which echoes what head writer Ron Carlivati recently said in an interview.

“They have gone through a lot, so I think there is hope for Abby and Chad, but it’s not going to be without a lot of work and a lot of time and a lot of trust-building and just really breaking the whole thing down and understanding, why are we here again after all the other things we’ve been through?”