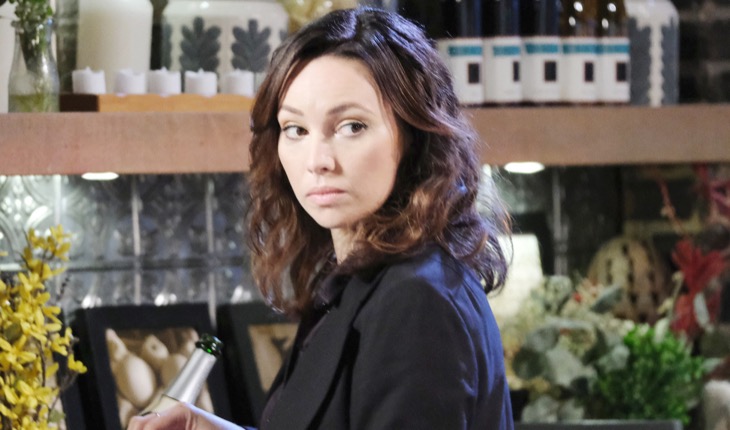 Days of Our Lives spoilers reveal that in Salem during the week of January 11, Gwen Rizczech (Emily O’Brien) isn’t done with Abigail DiMera (Marci Miller) yet. Despite making a deal with Chad DiMera (Billy Flynn), she goes back on her word. She corners Abigail and tells her every graphic detail about her night with Chad. It seems that the “Chabby” marriage is about to crumble.

DOOL spoilers reveal that Abigail will still be reeling over finding out that Gwen lied about her kissing Jake Lambert DiMera (Brandon Barash). She learns that Gwen is not just a liar and a drama instigator. She’s a dangerous con artist, but she can’t figure out what Gwen is after, even after comparing notes with Jack Deveraux (Matthew Ashford) and Jennifer Horton (Cady McClain).

Abigail is already livid with the information she has found out from Gwen, Jack, and Jennifer. She goes home and gets yet another bombshell. Gwen decides the time is right to completely destroy Abigail’s world and tells her that she slept with Chad. Obviously, Abigail goes into hysterics and blasts Gwen for sleeping with her husband.

Days Of Our Lives – Chad DiMera Too Late

Days of Our Lives spoilers reveal that meanwhile, Chad makes the decision to come clean to his wife after talking to Kate Roberts DiMera (Lauren Koslow). However, he is too late and Abigail is ranting all over the DiMera mansion. He tries to calm down his wife, but that’s easier said than done. This could easily destroy their marriage forever and Chad doesn’t know how to fix things. Sleeping with Gwen simply because he thought his wife cheated on him really isn’t a valid excuse.

Even though it seems that Gwen will get her way and destroy “Chabby,” we could be in for a bit of a surprise. Head writer Ron Carlivati has teased that this would destroy a normal couple. However, Chad and Abigail are anything but normal. Does that mean they could overcome this? It just might, especially when they stop to remember that this was Gwen’s goal from the beginning.

In order to defeat Gwen, they need to not let her have even one victory, but can Abigail get past her anger in order to make that happen? They will have to, even if it means putting on a happy face and pretending that everything is fine. This surely won’t be easy for Abigail when all she wants to do is rip Gwen and Chad’s heads off. But there is something more at stake… the question of what is exactly Gwen’s end game and what is motivating her in the first place?