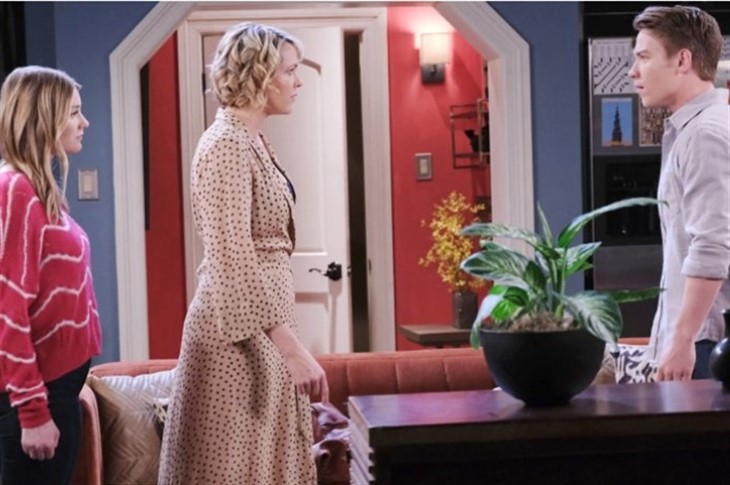 Days of Our Lives spoilers for the week of January 18 reveal that in Salem Tripp Dalton (Lucas Adams) and Charlie Dale (Mike C. Manning) will have an intense confrontation. That same week, Allie Horton (Lindsay Arnold) tries strengthening her case against the rapist. Could these two storylines merge into one big plot? Could Tripp risk his life to help Allie?

DOOL spoilers reveal that Allie will try to build a case against the man who really raped her in London a year ago. However, it won’t be easy because it’s he said/she said situation. Plus, the defense will bring up Allie not remembering that night and spending months falsely accusing another man of the crime. She might win, but the chances are just as even that she will lose. She has to find a way to strengthen the case to send Charlie to prison.

It is confirmed that next week, Nicole Walker Brady (Arianne Zucker) will have a suggestion for Allie. It isn’t revealed what that idea is, but we see a confession as the only way to guarantee Charlie going to prison. However, he’s not going to do that willingly, which means he will have to be tricked into admitting it on tape.

Days Of Our Lives Spoilers – Turning To Tripp Dalton

Days of Our Lives spoilers reveal that during that same week, Allie will turn to Tripp for advice. We can’t think of anything else she would talk to him about than Charlie. They were both his victims. Allie was raped by the man while Tripp could have lost his freedom or even his life the way he was attacked in Salem. However, Tripp is a good man and he is very much like his father, Steve “Patch” Johnson (Stephen Nichols). So, we see him not letting Allie do this on her own and he will take the risk.

Tripp and Charlie’s big confrontation might be more than just wanting answers. It could be Tripp’s way of killing two birds with one stone. By getting him to confess to raping Allie on tape, it will be proof that he committed the crime. At the same time, Tripp will be able to confront his secret brother who hated him so much he was going to let him go down for a rape he never committed.

However, this is very risky and Tripp’s life could be in danger. Plus, will Charlie really fall for the secret confession trick? We will have to keep watching the NBC soap to find out how this story develops over the next few weeks.