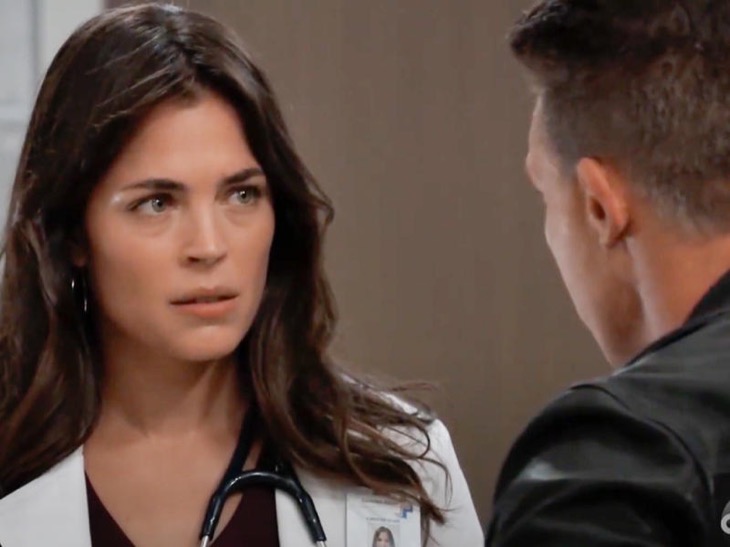 General Hospital viewers will recall that Jason enlisted Britt to be a “spy” – she is to report anything she notices about Cyrus’ activities in General Hospital that are “off” back to him. So far they have met a couple of times, once when she told Jason about the new pain medication Cyrus was touting and trying to add to the pharmaceuticals in the General Hospital pharmacy.

This was not very long after Sasha Gilmore (Sofia Mattsson) nearly died from a ramped-up version of cocaine that Cyrus had given her. Recently, Carly Corinthos (Laura Wright) took mob business into her own hands and crossed a line Jason never would have by having Damian Spinelli (Bradford Anderson) hack into the computers at the care home Cyrus and Martin Grey’s (Michael E. Knight) mother, Florence Grey (Annie Abbott) was in.

She had Florence transferred out into one of the Corinthos safe houses there in Port Charles, with her mother, Bobbie Spencer (Jacklyn Zeman) being responsible for Florence’s care. Cyrus practically became unhinged! First he struck out at Laura Collins, (Genie Francis) blaming her for kidnapping his mother, but she told him she didn’t do it but she would find out where she was and transfer her back to her care home in Vermont. Then he went to the Corinthos compound, quickly blaming Jason! Jason didn’t tell him anything although when Laura confronted him with it he covered for Carly, even though he was totally against what she did!

Jason can tell that Cyrus is unhinged and running scared, even though he puts on a brave face! Jason is thinking that Cyrus might come to the conclusion that his mother is being hidden in plain sight right under his nose at General Hospital! That means the first place he will head will be his Chief of Staff, namely Britt, and he won’t take no for an answer as to if Florence is there somewhere, possibly under an assumed name.

Cyrus could easily come to that conclusion when he calms down a little bit and realizes with all the times he’s been denied access to various medical records, it has to be someone at General Hospital who arranged for the transfer! He knows his brother Martin Grey (Michael E. Knight) was not able to pay for Florence’s care at the facility in Vermont, so it had to be someone with medical authority. He thinks it would also have to be someone who would have access to his electronic signature as the person responsible for Florence’s bills, which only could be someone at GH! Jason is swift to contact Britt about the danger.

He thinks that Cyrus might look for his missing mother there and that he won’t believe that she is not there. Britt will be appalled that anyone would kidnap an elderly patient out of a care home, and Jason will explain that he too was appalled when he heard of it although he won’t reveal much else. Britt tells him she will keep an eye out and try to calm Cyrus if he comes to her about the matter, and she is pretty sure she can convince him she knows nothing about it – after all, she doesn’t know anything except what Jason told her!