The Bold And The Beautiful Spoilers Next 2 Weeks: Zoe Confronts Zende, Wants To Know If She Still Has A Chance 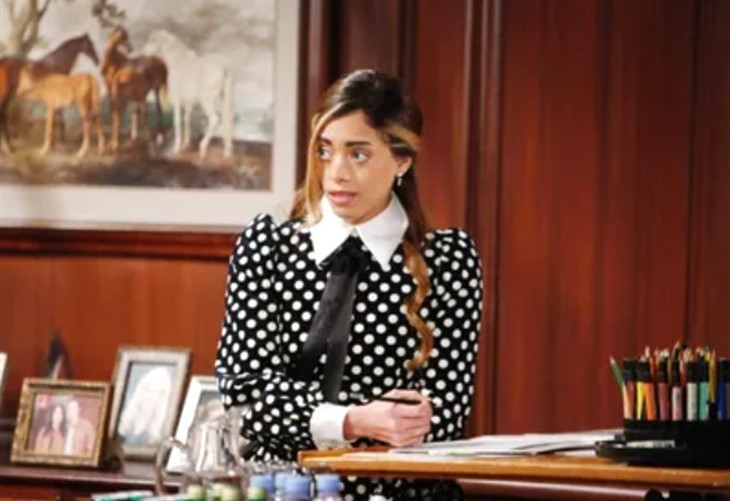 The Bold and the Beautiful spoilers for the week of January 18 reveal thatin Los Angeles  Zoe Buckingham (Kiara Barnes) will still be reeling over her sister’s decision and that “Pende” kiss. It’s already confirmed by the actress that Zende Forrester (Delon de Metz) is Zoe’s, back-up man. Not wanting to lose that, she will take action to make sure he stays that way.

The Bold And The Beautiful Spoilers – Zoe Buckingham’s Fear

B&B spoilers reveal that Zoe has stayed with Carter Walton (Lawrence Saint-Victor), but kept Zende in her back pocket. At first, we thought it was because she was conflicted about her feelings. However, Barnes told Soap Opera Digest that Zoe has always been abandoned by the men in her life. So, she likes to keep a “plan B” in case Carter ends up leaving her. Basically, Zende is her “back-up man.” Paris Buckingham (Diamond White) staying in L.A., taking the job at the Forrester Foundation, and kissing Zende puts Zoe’s plan B in jeopardy.

Zoe gets nowhere when trying to get Paris to leave once again. This time, Paris isn’t backing down and has no intention of going anywhere. Even though Paris has no clue why her sister is pushing her out of Forrester Creations and Los Angeles, she is determined to stick around. Zoe will panic and try to figure out how to get rid of her sister. It is suggested that she could interfere with Zende and Paris’ romance.

The Bold And The Beautiful Spoilers: Hope Blames Steffy For Cheating, Tried To Steal Her Husband?

The Bold And The Beautiful Spoilers – Confronting Zende Forrester

The Bold and the Beautiful spoilers for the week of January 18 reveal that Zoe will ask a question. She interrogates Zende about Carter. Since Zoe is in panic mode and can’t stand losing her back-up man, she will want to know if he’s still an option. As fans recall, she asked Zende if she should accept Carter’s marriage proposal. Even though Zende was disappointed, he told her to marry Carter.

Her question next week to Zende will throw him off guard and put him in an awkward position. Not only is he starting a romance with Paris, but Carter is his best friend. But none of that matters to Zoe. As long as she gets what she wants.

B&B Spoilers – What About Carter Walton?

We know that during the month of January, Carter will lay down boundaries with Zende. They never had issues with boundaries before, so we have to assume that Zoe is the reason why. Does she actually try to switch men? Will Carter find out that her heart isn’t as loyal as his? Or perhaps Zende rats out Zoe and tells Carter to put his woman on a leash? We will have to keep watching the CBS soap to find out.