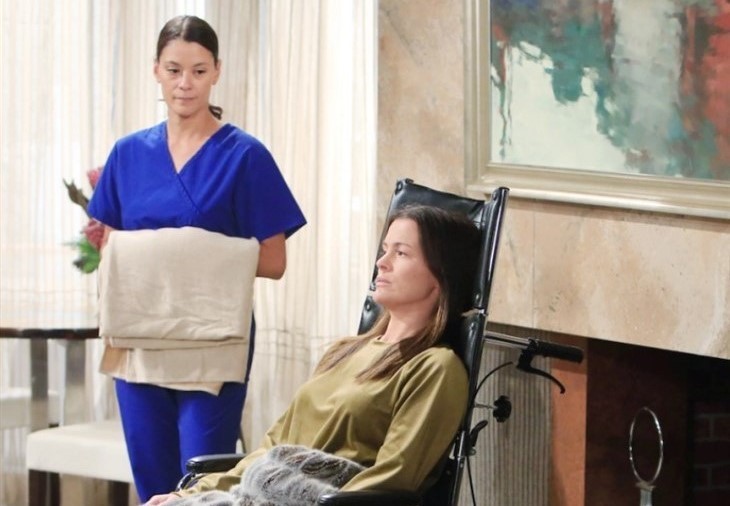 The Young and the Restless spoilers show that there has been a change to the cast in recent days, and it has to do with the Chadam storyline. Evelina Martinez plays the part of Chelsea Newman’s (Melissa Claire Egan) nurse on the CBS sudser.

Egan herself shared the good news and not just because she is involved in the plot. It turns out that she and Martinez are good friends. She shared a photo of the two of them together with the caption, “How lucky am I that my dear friend Evelina Martinez was cast as my nurse! She’s fantastic!”

Melissa Claire Egan’s husband has also been on Y&R in plots involved with her character. Matt Katrosar appeared on first as Chelsea’s kidnapper in November, as Adam tried to keep her from ruining his plot to blow up Newman Towers.

The Young And The Restless Spoilers: Amanda Brings Back All Of Devon’s Hilary Feelings – Elena Forgotten

Katrosar then returned to Genoa City when Chelsea collapsed in the penthouse. He came on the scene as a paramedic. At that time Adam found Chelsea on the floor after her aneurysm burst. He would have gotten there sooner if he hadn’t been spying at the Shey wedding!

And in the first place, it was Adam who triggered her serious condition. Before the botched explosion, he took out the power at the Jabot building. Chelsea was there and she bumped her head in the stalled elevator leading to her current issues.

The Young And The Restless Spoilers – Will Adam Newman Pay The Price For His Treachery?

Fans are livid that Adam is behind Chelsea’s woes, all the while seeming to pine after Sharon Newman (Sharon Case). That’s why he was at the Shey wedding and delayed in getting back to Chelsea who was scheduled for surgery the very next day.

But could Adam’s redemption be in the works? One of his other victims, Faith Newman (Alyvia Alyn Lind), is going to find herself in trouble. She will need saving and it looks like Adam could be the hero. How convenient is this? Very.

But for now, we’ll have to wait and see how things shake out Y&R fans.