Days Of Our Lives Spoilers: Tripp Dalton Is Relieved To Hear Charlie Dale Is In Police Custody 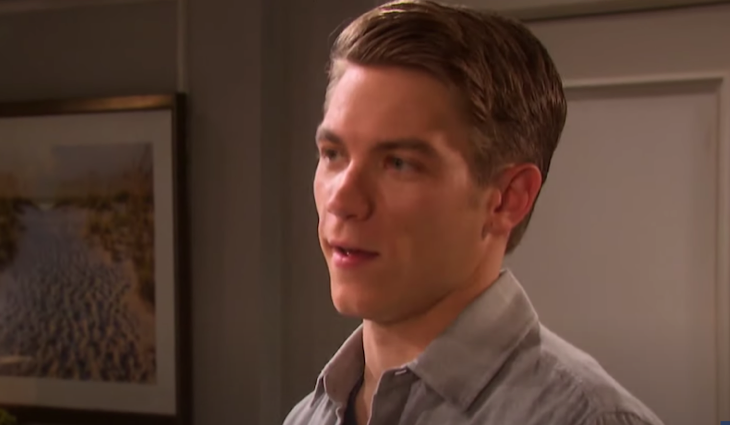 Days of Our Lives spoilers tease that in Salem Tripp Dalton (Lucas Adams) will be very relieved to hear that Charlie Dale (Mike C. Manning) is in police custody in an upcoming episode of Days of Our Lives!

After finding Ava Vitali (Tamara Braun) tied up and having been drugged in Charlie’s apartment, he goes looking for Charlie after making sure that Ava is being cared for at Salem University Hospital. Days of Our Lives viewers will recall Ava was frantic and out of her mind with fear, having hallucinated that Charlie had killed Tripp! Out of her ravings, however, Rafe was able to determine that the one coherent thing she was able to tell him, and that was that Charlie was the one who tied her up and was holding her captive!

Rafe knows that Charlie is one sick, sadistic person to treat his own mother in that manner, and he has to get him off the street! Once Ava is in a room, Kayla Brady (Mary Beth Evans) grudgingly cares for her although she finally comes to understand that it is Ava’s other son, Charlie, not Tripp, who raped Allie Horton (Lindsay Arnold) as well as drugging and holding his own mother captive! Tripp is called to let him know that his birth mother has been found and is in the hospital first; and he goes to visit her, to assure her that Charlie hasn’t killed him and that he is just fine.

Meanwhile, Charlie has been busted by Ben Weston (Robert Scott Wilson) at Belle and Shawn Brady’s (Martha Madison, Brandon Beemer) home where he was getting ready to consummate his relationship with Claire Brady (Olivia Durant). He would have had John Black (Drake Hogestyn) who had been trying to call Claire and not getting an answer not called Marlena Evans (Deidre Hall) who happened to be with Ben at the time. Marlena talks to Claire while Ben takes Charlie out the back. Charlie arrives home only to find his mother missing and Rafe waiting for him!

Tripp is surprised to find out that Ava has another son, and really surprised to find out who he is! John and Steve Johnson (Stephen Nichols) return from Philadelphia, where they found out about Charlie from Angelo Vitali (Angelo Diffe) and get up to speed on the Charlie situation; then Steve gives the good news to Tripp. Charlie is in police custody. That is good news for more than one reason, especially after he finds out it was Charlie who put their mother into the state she is in!

Now, knowing about what Charlie really is and that his mild-mannered Titan intern persona is just a smokescreen, Tripp knows that Charlie must have been the one to rape Allie and father her baby! Tripp knows that Allie could be in danger from Charlie also, since she may remember more clearly what happened to her and be able to identify him! Plus, even Ava in her weakened and delirious state appears very coherent and lucid when she remembers Charlie admitting to the crime! The trick will be getting Ava’s testimony admitted in court – but at least as long as Charlie is in custody, she, Allie, and the rest of the women in Salem will be safe!