Eastenders Spoilers: Max Rats Out Sharon, But Will Ian Believe His Wife Is Poisoning Him? 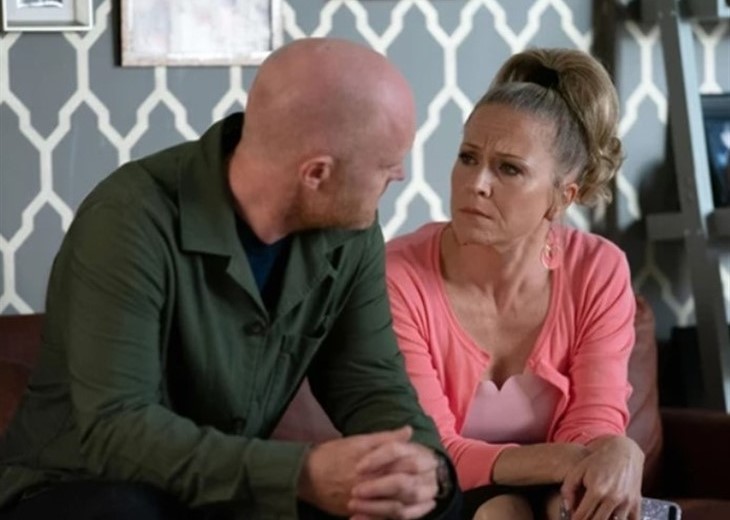 Eastenders spoilers reveal that in Walford Max Branning (Jake Wood) and Ian Beale (Adam Woodyatt) are enemies. However, when Max overhears Sharon Beale’s (Letitia Dean) phone conversation and figures out what’s really going on, he’ll talk to Ian. He suggests that Sharon is causing her husband’s deteriorating condition, but will Ian believe him?

Last year, Sharon lost her son, Denny Rickman (Bleu Landau) on the same night as her youngest was born. It was a bittersweet and traumatic time for her. For a time, she couldn’t even take care of her own baby. As the investigation concluded, she blamed Phil Mitchell (Steve McFadden) because the boat tragedy occured when he was after Keanu Taylor (Danny Walters).

What she didn’t know was Ian was actually responsible for the boy’s death. That is something she has recently discovered due to Denny leaving his mom a voicemail minutes before his death. Eastenders spoilers reveal it was a voicemail that has set her revenge scheme in motion.

Eastenders spoilers reveal that Sharon and Phil are working together to make Ian pay for Denny’s death. Phil has doubts that Sharon is cut out for something like this, but she feels compelled to avenge Denny’s death. So, she has been crushing up pills and slipping them to Ian. When people make an issue out of Ian’s deteriorating condition, she claims that he just needs rest. At the same time, the guilt is getting to her and now she’s stepping up the poisoning plot to kill her new husband.

Eastenders Spoilers: Katy Gets Even Worse, Drastic Action To Stop Mick’s Abuse From Coming Out

According to Inside Soap magazine, Ian will put the puzzle pieces together and figure out what is really going on. Even though Max and Ian are enemies and do not get along, he makes a decision. He actually goes to Ian and urges him to get more testing done by the doctors to figure out what is causing his condition. Then, he makes an allegation that leaves Ian shell-shocked.

Eastenders spoilers reveal that Max not only encourages Ian to find out what is really wrong with him but goes a step further. He suggests that Ian’s longtime friend and new wife, the person he trusts most in the world, is the same one who is causing his condition. He tells Ian that Sharon is literally killing him. However, due to the men’s relationship, will Ian even believe Max?

What do you think is going to happen with Sharon’s plan to kill Ian? Will she be able to go through with it or will the guilt cause her to stop? What will Ian say when Max tells him that Sharon is the one causing his declining health? We will have to keep watching the soap to see how this storyline ends.