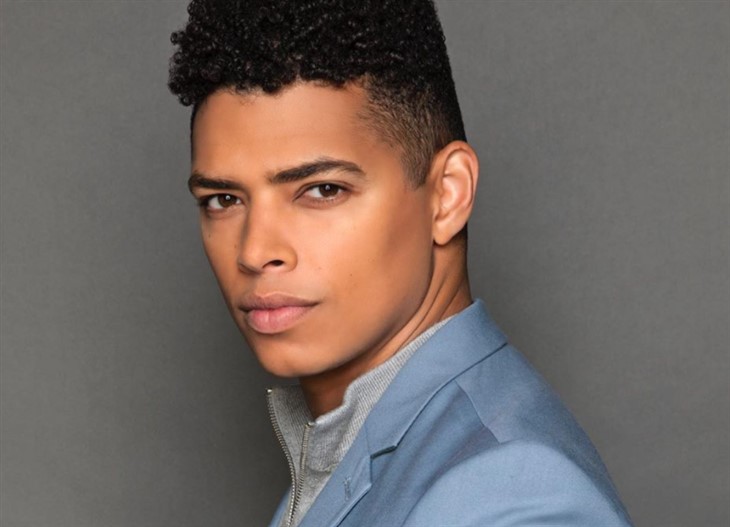 The Bold and the Beautiful spoilers reveal that in Los Angeles Zende Forrester has officially fallen for Paris Buckingham (Diamond White). Discussing the blossoming romance between the two, actor Delon de Metz revealed what makes Paris so appealing to the designer. He talked about how Paris caught Zende’s eye because she’s on a crusade for justice and wants to save the world.

The Bold And The Beautiful Spoilers – From Sister To Sister

B&B spoilers reveal that when Zende returned to Los Angeles, he first had a connection with Zoe Buckingham (Kiara Barnes). However, she was dating Carter Walton (Lawrence Saint-Victor) and is now engaged to him. Even though Carter is head over heels, it seems that Zoe’s heart is still divided. In fact, she couldn’t even answer Carter’s proposal until she asked Zende for his opinion. Of course, he didn’t want to stand in the way of Carter or Zoe’s happiness and told her to marry him.

Soon after that, he met and fell for Zoe’s sister, Paris.

Even though there has been plenty of flirting between Zende and Paris, nothing really happened between them until last week. Paris decided to turn down the job of her dreams and leave the city because of her sister. However, Zende chased after her and stopped her from going. That is when Paris ran up to him and gave him a kiss. It seems that we will start to see the beginning of their romance.

The Bold And The Beautiful Spoilers – What Makes Paris Buckingham Special?

The Bold and the Beautiful spoilers reveal that de Metz told Soap Opera Digest what makes Paris so special. He is really attracted to her being a justice crusader. Plus, she wants to save the world and that is most likely very different from the other women he’s surrounded with. It certainly is a complete 180 from Zoe, that’s for sure. The actor said that Paris trying to save everyone really caught his eye. We imagine it will also capture his heart, though.

The actor teased that it won’t be a romance without obstacles or difficulties. Zoe will be an issue and it sounds like Carter could be, too, but for different reasons. In fact, Carter lays down boundaries with Zende. We’re not exactly sure what prompts this, but he would only be concerned if it had something to do with Zoe. Could she try once again to have both men despite being engaged?

She certainly will be jealous once she learns that Zende and Paris shared a kiss. She might even think that stealing Zende will drive Paris away from Forrester Creations, and maybe even out of L.A. But we have a feeling Paris isn’t going to give up so easily. We will have to keep watching the CBS soap to see how this storyline develops over the next few weeks.