Days Of Our Lives Spoilers: Kate Interrogates Gwen As To Her Motives, But Gwen Is Cryptic 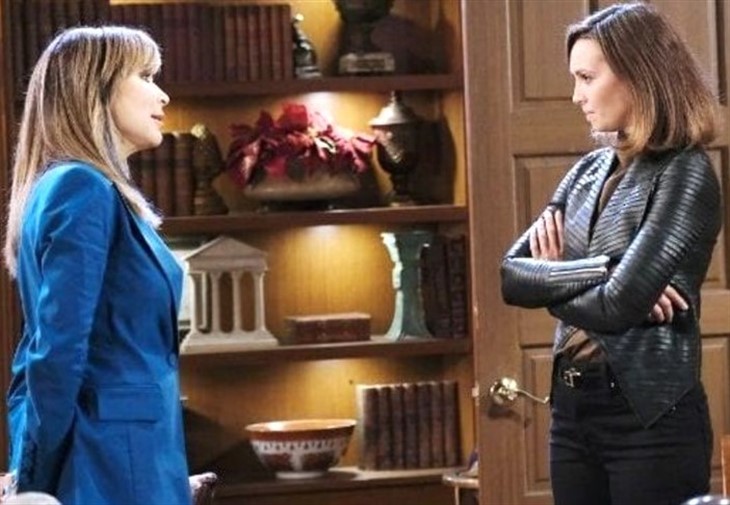 Days of Our Lives spoilers tease that in Salem Kate Roberts (Lauren Koslow) will interrogate Gwen Rizchech (Emily O’Brien) in an upcoming episode of Days of Our Lives, but Gwen will remain cryptic as to her motives.

Days of Our Lives viewers will recall that Gwen has made a mess of many peoples’ lives in the last few months. Although she seems bent on destroying the Deveraux and DiMera families, she has also made life pretty difficult for Kate as well, albeit more indirectly. Kate and Jack Deveraux’s (Matthew Ashford) one-night stand would never have been exposed had it not been for Gwen; she is the one who found Kate’s keepsake box of letters and dumped them out on the floor!

She is the one who made sure that Kate’s letter from Jack was displayed prominently so that Abigail DiMera (Marci Miller) would find it and Gwen knew she wouldn’t be able to help but read it! That nearly broke up Jack and Jennifer Deveraux (Cady McClain) and the worst part of all was this happened on the night of their anniversary party, where Abigail was so angry at her father she nearly destroyed her mother by reading the letter there is a public setting! Kate has noticed the behavior patterns that Gwen has displayed.

What she wants to know is Gwen’s motives for stalking the Deveraux family and also if she is stalking the DiMera men as well. After all, although she has seduced Chad DiMera (Billy Miller) she was with Jake DiMera, (Brandon Barash) than Jake Lambert first. Kate wonders if as much research as Gwen did on the Deveraux’S, she had done the same with Jake and already knew he was Stefan O. DiMera’s (Brandon Barash) twin!

Kate couldn’t help but know what happened between Gwen and Chad; she heard the slap heard around the world, or at least the DiMera mansion when Gwen revealed it to Abby! Abby practically knocked Gwen off her feet and onto the floor! Gwen isn’t fooling Kate with her innocent act. Kate has been around the block a few times herself with the deception game, and it takes one to know one! Kate confronts Gwen with what she has noticed and starts interrogating her.

She wants to know what Gwen thinks is in it for her, with her schemes. Gwen isn’t giving away her secrets so easily, even though Kate is trying to sweet-talk her into telling her motives. Kate knows that if she can gain Gwen’s trust she is more likely to tell her. However, Gwen refuses to play Kate’s game – she knows exactly what Kate is trying to do!

Gwen teases Kate with tidbits – tidbits that may or may not be even true! Kate tries the approach of offering advice from an older and wiser schemer and sometimes con artist who’s been around the block considerably more times than Gwen! But Gwen will only tease Kate with her cryptic answers, she will not tell her what her motives are or what she expects to achieve with her schemes!