Days Of Our Lives Spoilers: Sarah Worries Over Philip’ Safety, Fears Xander Has Put A Target On His Back 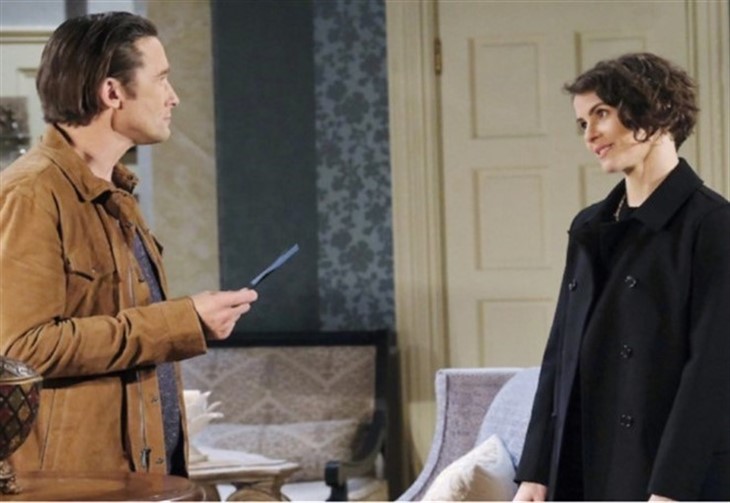 Days of Our Lives spoilers tease that in Salem Sarah Horton (Linsey Godfrey) will worry over Philip Kiriakis’ (Jay Kenneth Johnson) safety, fearing Xander Kiriakis (Paul Telfer) has caused a target to be put on his back in an upcoming episode of Days of Our Lives!

Days of Our Lives viewers will remember from a recent episode that Philip was extremely upset that Xander “fixed” his money laundering situation. Xander taunted Philip, busting him for his money laundering scheme and told him he knew everything. He accused Philip of sending Charlie Dale (Mike C. Manning) after his boss, Ava Vitali (Tamara Braun) after he saw the headlines about their young intern being arrested.

Philip didn’t know anything about that and some discussion of Charlie being too much of a wimp to do something like that took place. Xander showed Philip his tablet where the flash drive Sarah had downloaded the incriminating intel from Philip’s laptop, then advised him that he had saved him from the wrath of Victor Kiriakis (John Aniston) by dissolving the overseas shell company that Philip had been funneling the money to. Xander didn’t know the whole story though when Philip was worried he’d be killed, Xander told him Ava was no longer a threat.

Days Of Our Lives Spoilers: Kate Interrogates Gwen As To Her Motives, But Gwen Is Cryptic

Philip told him the real threat was Angelo Vitali (Angelo Tiffe) Ava’s cousin! Xander acted like he didn’t know about Angelo, and probably he didn’t. He knew a lot about Ava and knew what she was capable of, and probably knew she was in the warehouse in Nashville that blew up where Dr. Wilhelm Rolf (William Utay) had been keeping people to use his resurrection formula on. He was working with Kristen DiMera (Stacy Haiduk) at that time, and was her henchman. Philip had gotten into this mess by borrowing money from the mob to pay off his gambling debt.

Sarah finds out that Xander dissolved the shell company and learns the rest of the story. Neither Sarah or Xander thought that Philip’s life could be in danger, although once Xander found out Philip was involved with Ava he suspected some mob involvement! Sarah confronts Xander and asks why in the world would he take that extra step of dissolving the shell company instead of just giving the evidence to Victor and letting him handle it? She says Philip made a good point when he said Xander’s “good deed” could get him killed and then what would Victor think of Xander?

It is true that Victor was once involved with the Greek mob, but that is a lot different from the Italian mob. Xander pointed out that the mob Victor was once involved with may be a rival of the mob Ava and Angelo are involved with! Xander is even getting a little scared and wishes he’d handled things differently but then he didn’t have all the information. He didn’t know the shell company was a pipeline to the mob. The last thing anyone needs is a mob war coming to Salem! Now Xander has to backtrack and figure out how to protect Philip – or decide to let him suffer the consequences! But he knows if he doesn’t find out some way to protect him Sarah will likely be pretty upset with him!