Days Of Our Lives Spoilers: Tony And Chad Team Up, Can They Save Kristen From Herself? 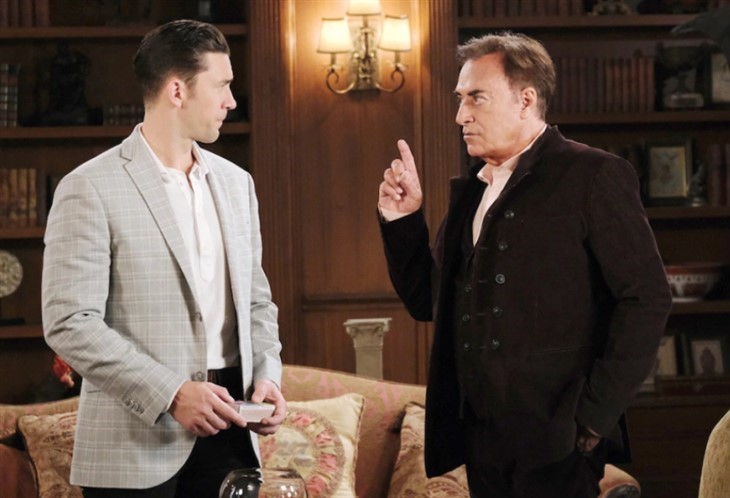 Days of Our Lives spoilers reveal that in Salem Kristen DiMera (Stacy Haiduk) is determined to make Chloe Lane (Nadia Bjorlin) pay. It’s not just about the New Year’s Eve kiss, though. She blames Chloe for Brady Black (Eric Martsolf) getting shot and even takes Tony DiMera (Thaao Penghlis) hostage. Can the DiMera brothers team up and save Kristen from her bad choices?

DOOL spoilers reveal that Kristen takes her own brother hostage in order to try and get out of prison. After Brady is shot, she blames one person and wants Chloe to pay with her life. Even though Kristen would never hurt Tony, authorities really don’t know that. They do know that Kristen is extremely unstable and has zero control over her emotions. During that state, she is unpredictable and dangerous.

Kristen has been ticked off with Chloe ever since she saw her kissing Brady, which was published in the newspaper. She angrily confronted Brady about it, but it wasn’t what Kristen thought. Brady and Chloe claim it was a “friendship kiss.” Only in soaps would “friends” kiss each other, especially when one or both is in a committed relationship. What else did they think that Kristen would think? However, the kiss isn’t the only reason why Chloe will become a target.

Days Of Our Lives Spoilers: Sarah Worries Over Philip’ Safety, Fears Xander Has Put A Target On His Back

When Kristen learns that Brady has been shot, she will blame Chloe. She never should have involved Brady in Philip Kiriakis’ (Jay Kenneth Johnson) mess with the mob. But she did and he will end up fighting for his life.

Days Of Our Lives Spoilers – DiMera Brothers Team Up

Days of Our Lives spoilers from TV Guide confirm that Tony and Chad will team up and try to help their sister. Tony and Kristen grew up together and were very close, but that is a bit of a messed up story. However, they survived Stefano DiMera’s (Joseph Mascolo) plans for them. They did have a bit of a falling out not too long ago but have since repaired their relationship.

Chad is going through his own drama with Abigail DiMera (Marci Miller) and Gwen Rizczech (Emily O’Brien). However, Chad didn’t grow up the way Tony did and he has his own reasons for helping Kristen.

As usual, Kristen has let her emotions control her instead of the other way around. She could make a fatal mistake by going after Chloe. Even taking Tony hostage and trying to break out of prison could add years to her sentence. She needs to be reminded of the consequences and that taking matters into her own hands landed her in prison in the first place. Does she really want to be separated from Brady and their daughter for the rest of her life? We will have to keep watching the NBC soap opera to see if Tony and Chad can save Kristen from herself.

Be sure to catch up on everything happening with DOOL right now. Come back here often for the Days of Our Lives spoilers, news, and updates.