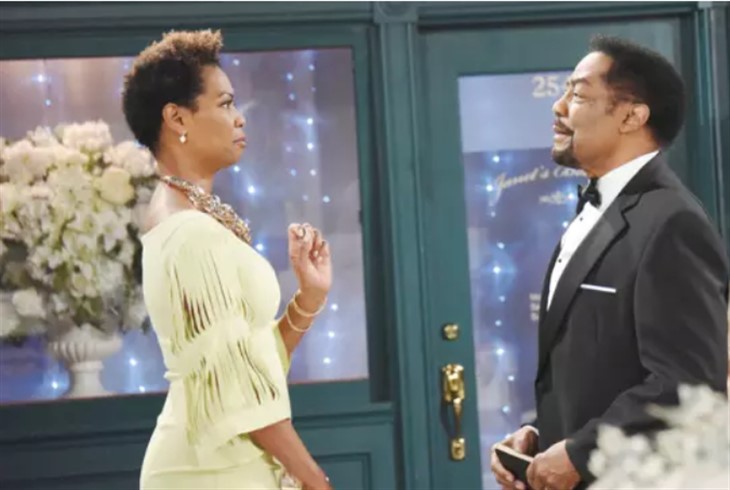 Days of Our Lives (DOOL) comings and goings spoilers tease that Abe Carver (James Reynolds) would like nothing better than for Dr. Valerie Grant (Vanessa A. Williams) to return to Salem full-time. It was obvious that both Abe and Valerie still have romantic feelings for each other. They were quite happy together before Valerie took a Chief of Staff position at a hospital in Washington.

DOOL soap opera fans know since Abe is the mayor of Salem he couldn’t and didn’t really want to carry on a long-distance relationship so the couple eventually broke up.

Up until now, Valerie has seemed perfectly content to come and go to Salem for family milestones such as her son Eli Grant’s (Lamon Archey) weddings such as his aborted wedding to Gabi Hernandez (Camilla Banus) as well as his more recent and long-awaited wedding to true love Lani Price (Sal Stowers). On Christmas Day, Lani gave birth to twins and once again rushed to Salem to meet her brand new grandbabies.

DOOL Spoilers – Will Her New Grandbabies Lure Valerie Grant Back To Salem Permanently?

As although she was slightly disappointed that Eli and Lani named the boy after Abe and the girl after Julie Williams (Susan Seathford Hayes) she understood once Eli explained his reasons. Abe and Valerie reminisced about their own relationship and Abe was hopeful that with the twin’s arrival, that Valerie might move back to Salem to be closer to not only her new grandchildren but to him as well. But before Valerie could give any kind of reply, Abe got word that the twins were missing

Days Of Our Lives Future Spoilers – Will A Crisis Convince Valerie Grant To Stay In Salem?

Although the identity of the kidnapper will soon be identified by both Lani and Valerie as Dr. Amanda Raynor (Victoria Platt), a former doctor at University Hospital. She also the doctor who accepted a large cash payment to look the other way as Victor Kiriakis (John Aniston) and Xander Cook (Paul Telfer) switched Sarah Horton (Linsey Godfrey) and Kristen DiMera’s (Stacy Haiduk) babies and allowing Kristen to believe her baby died when in truth she was given to a clueless Sarah to raise. The truth came out finally when Nicole Walker (Arianne Zucker) began to suspect the truth and tracked Dr. Raynor down. After much prodding, Raynor admitted the truth. Between Xander’s threats and the large cash payment, Raynor admitted that both her guilt and fear kept her from admitting the truth about the baby swap.

DOOL Soap Opera Updates – Why Would Dr. Raynor Get Involved In Another Illegal Baby Swap?

It seems like Dr. Raynor would want to stay away from an infant nabbing after living in constant fear of Xander. But Raynor’s involvement will likely only be the beginning of a huge mystery. And if the rumors are true and Dr. Raynor is Vivian Alamaine’s (Linda Dano) pawn, then Valerie might feel that she needs to stay in Salem until the mystery is solved and the twins are back where they belong. Valerie will be glad she decided to stick around because not only will she get to see the twins whenever she wants, but she might just find herself back with Abe but happier than she has ever been!

Will Valerie find herself sticking around Salem in order to help find the twins and support Eli and Lani as they work to find their babies? Will this eventually lead Abe and Valerie to reconcile? And is Vivian really the true mastermind? Love can be found even in times or great duress in Salem, so stay tuned Days of Our Lives airing weekdays on NBC. And don’t forget the check back right here regularly for all your Days of Our Lives news, DOOL comings and goings information and next week spoilers!