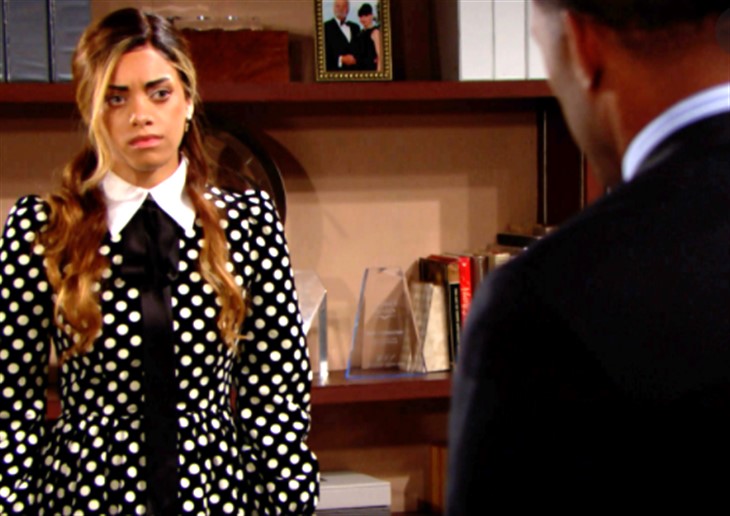 The Bold and the Beautiful spoilers reveal that in Los Angeles Ridge Forrester (Thorsten Kaye) catches Zoe Buckingham (Kiara Barnes) red-handed. Scared that Ridge or Paris Buckingham (Diamond White) is going to expose her sketchy ways, she shocks Carter Walton (Lawrence Saint-Victor). She tries to convince him to marry her immediately, but he will be suspicious over the sudden 180.

The Bold And The Beautiful Spoilers – Ridge Forrester Gets An Eyeful

B&B spoilers reveal that Ridge isn’t fooled by Zoe. He is already onto her and doesn’t trust her for a second, especially with his good friend Carter. He warned the COO to be careful around Zoe and he just knew that she would break his heart. His suspicions are confirmed when he catches Zoe and Zende Forrester (Delon de Metz) together. It seems being shot down doesn’t stop Zoe from trying to again. When Ridge catches them, they are way too cozy for being “just friends” or “coworkers.”

During the week of February 1, Zoe won’t just have Ridge to worry about. Paris will start to consider exposing her sister to Carter. She thinks that Zoe is only interested in Carter’s money and title. Recently, Paris questioned her sister about why she always brings up that she’s engaged to the COO instead of referring Carter to his name. She ends up finding out more information that makes her feel bad for Carter. She wants to warn him and Zoe knows it’s only a matter of time before her fiance finds out the truth.

The Bold and the Beautiful spoilers from the new issue of Soap Opera Digest confirmed that Zoe will know her time with Carter is running out. During the week of February 1, she panics over Carter finding out the truth. Not just about her only loving his money and position, but about her seducing Zende. She decides to take action and suggests they get married immediately. Even though Carter has always wanted this, it’s the complete opposite of how Zoe does things in their relationship. So, it sets off red flags.

It is teased that Carter will question Zoe why she suddenly wants to get married right away. For their entire relationship, Zoe has always been the one to take things slow while Carter was the speedy one. In fact, he wanted to marry Zoe right away not too long ago, but she kept putting it off. So this change of heart is completely out of character for Zoe. It will make Carter wonder about the real reason. Will he be informed about the truth or could he end up marrying someone who doesn’t love him?