Days Of Our Lives (DOOL) Spoilers: Nicole Suggests Allie Be Hypnotized To Strengthen Her Case Against Charlie 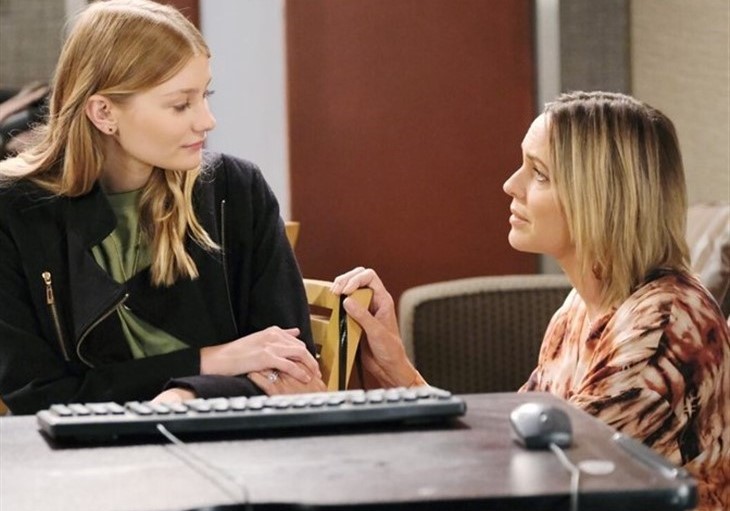 Days of Our Lives (DOOL) spoilers tease that in Salem Nicole Brady (Arianne Zucker) will have a suggestion for Allie Horton (Lindsay Arnold) that could strengthen her case against Charlie Dale (Mike C. Manning) in an upcoming episode of Days of Our Lives. She suggests that Allie be hypnotized to bring up more accurate memories of the night she was raped; after all, accurate memories equal accurate testimony!

Allie and Nicole talk over her impending rape case against Charlie as they take baby Henry Horton (Jayna and Kinsley Fox) for a stroll in the baby buggy. Allie talks again about being triggered by Charlie telling her “arrivederci” and him seeming familiar and reminding her of Tripp Dalton (Lucas Adams). She tells Nicole about having talked about that with her grandma Dr. Marlena Evans (Deidre Hall) and Marlena trying to see if she could remember anything any more clearly.

At the time, she couldn’t, but that didn’t stop her from sneaking into the Salem City Jail and trying to bully the truth out of Charlie himself! She didn’t get very far, and she actually didn’t have any business being there and questioning him at all. He was being held for kidnapping his mother, Ava Vitali (Tamara Braun) and even though Ava said that Charlie told her he raped Allie, because of Ava’s mental state after being drugged, the testimony wouldn’t be admissible in court. Previous to that, Steve Johnson (Stephen Nichols) had also questioned Allie about if she could separate out any memories of that night, with questions like if she was sure it was Tripp’s hand that was holding her down and not someone else’s. At that point, Allie was no longer sure, which prompted her to ask hard questions of Charlie where he was in the holding cell.

Allie and Nicole decide that it may be worth a shot for Allie to be hypnotized to see if Marlena can tease out any clearer memories from Allie’s suppressed subconscious. Nicole explains that sometimes people’s minds push traumatic memories into the subconscious as an automatic defense mechanism. The conscious mind cannot always handle and process when a person goes through a traumatic experience such as rape or other violent attacks. Therefore, the memories of the traumatic incident are “pushed down”.

Sometimes people recover enough, later on, to remember them on their own, sometimes they are hidden forever, sometimes they emerge in nightmares or in a triggering incident of the person’s subconscious such as what happened to Allie when Charlie said “arrivederci”. More than likely, Charlie said that to her when he was finished raping her and was leaving her flat! Allie may wonder if her being drunk that night would hinder any subconscious memories from having formed, and Marlena will answer in the negative. No one is truly so drunk that their brain is hampered from processing memory, even if the memories are traumatic.

Days of Our Lives viewers will recall when Maggie Kiriakis’ (Suzanne Rogers) memories came back fully about the night Adrienne Kiriakis (Judi Evans) died, even though she was passed out drunk. She remembered being in a car with Orpheus (George Del Hoyo) and Evan Frears (Brock Kelly) and being able to exonerate Will Horton, (Chandler Massey) who had been serving prison time for it. Will is Allie’s big brother, so she may already know the story, and if not, Marlena may use it as an example. Marlena says the hypnotism may bring up trauma but it will also bring up details – details that are desperately needed to clear up who really raped Allie that night in London!