General Hospital Spoilers: Jason And Britt Strategize To Prove Cyrus Is Using GH For A Front 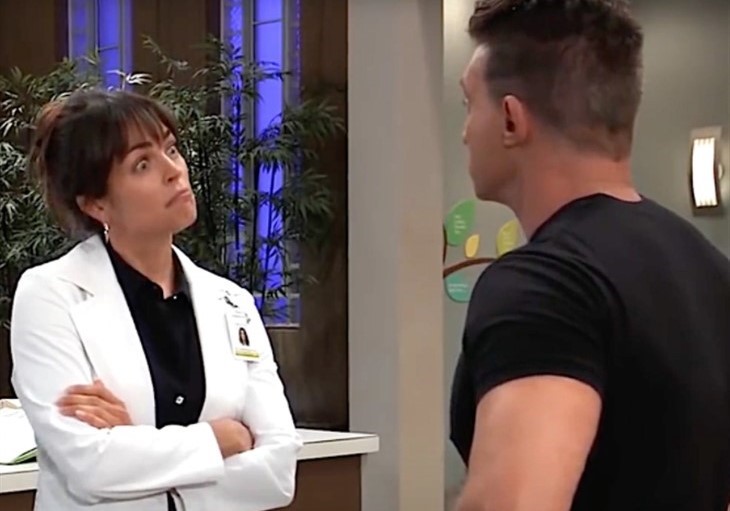 General Hospital spoilers tease that in Port Charles, NY Jason Morgan (Steve Burton) and Britt Westbourne (Kelly Thiebaud) will strategize in an upcoming episode of General Hospital to prove that Cyrus Renault (Jeff Kober) is using GH for a front!

Jason knows Cyrus has to have taken over the hospital for another reason than being philanthropic and wanting to make a good name for himself! He and his organization are still running drugs through Port Charles, with many drug overdose casualties. A hospital, with its pharmacy and labs, would be a perfect place not only to funnel drugs through but to possibly create them. Longtime General Hospital viewers will recall that Helena Cassadine (Constance Towers) had a lab in the basement of GH.

More recently, this is where Olivia Jerome (Tonja Walker) kept Dr. Griffin Munro (Matt Cohen) hostage while trying to channel her late obsession Duke Lavery (Ian Buchanan) through him! Cyrus is pretty good at doing research, and he probably knew about this old lab of Helena’s hidden in the basement. It would be perfect to have a secret drug manufacturing lab.

After all, meth is cooked up in much less better equipped places such as the kitchens of abandoned houses by dealers much less sophisticated than Cyrus! Neither Jason nor Britt might know about this lab in the basement, although Britt’s mother Liesl Obrecht (Kathleen Gati) might be aware of it. There may even be a separate tunnel that runs into it from among the many catacombs under Port Charles, Helena and her minions had to have had a way to access it without going through the main hospital!

Jason and Britt come up with a plan to try and prove Cyrus is using GH for a drug-running front. Jason might employ Damian Spinelli (Bradford Anderson) in researching old blueprints of the original part of the building to see places that may be hidden, closed off or no longer used where Cyrus might have a secret lab or another type of facility. Depending on how old the blueprints are, they might find Helena’s lab in them, although of course it won’t be marked “Helena’s Lab!” Like any other hospital, General Hospital has likely had improvements, new wings, and new equipment installed over the years.

As far as Britt has been able to tell while Cyrus has been busy dealing with his mother’s “kidnapping” there have been no illegal drugs run through General Hospital’s pharmacy, nor have any been tried out on patients. There is the one that Jason caught Britt studying that she remarked increased dopamine in patients, but that could have been one that Liesl is trying on Franco Baldwin (Roger Howarth) in her treatment of him. The room they were in at the time was filled with MRI images of brains.

Dopamine is a neurotransmitter found naturally in the brain, although the chemical clone could provide a high if misused. Dopamine is used medically in conditions such as Parkinson’s Disease. However, Britt confirmed this drug was not given to her by Cyrus as anything other than a medical use drug. So for right now, Jason and Britt’s strategy is to find any areas in GH where Cyrus could have an illegal lab or storage and distribution of drugs taking place, and then getting proof of it.