The Bold And The Beautiful (B&B) Spoilers: Flo Fulton’s Revenge Against Sally Spectra 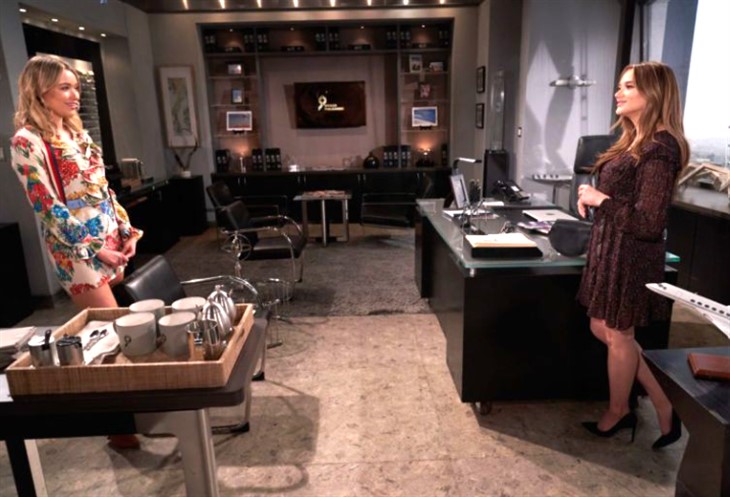 The Young and The Restless crosses over with its sister soap, The Bold and The Beautiful this week on The Bold and The Beautiful. Viewers familiar with both shows will remember that Sally royally screwed up her life and reputation in Los Angeles, and that is why she moved to Genoa City to get a new start in the first place. Summer has been talking to Wyatt Spencer (Darin Brooks) on the phone but now it’s time for a meeting. Wyatt assures her that he has everything set up.

The Bold And The Beautiful Spoilers: Finn Forgives Steffy In Time, But Needs One Thing First

The meeting is at the offices of Spencer Publications, where Summer encounters Bill not quite ready for business, in the middle of a workout! After he gets cleaned up and ready for the meeting, Summer and Kyle Abbott, (Michael Mealor) who traveled with her, have a very successful meeting with Dollar Bill, and Flo walks into Dollar Bill’s office and overhears Summer drop Sally’s name to him. Of course, other than the business deal with Spencer Publications, Summer has an alternate agenda – to get dirt on Sally.

Summer’s channeling her mother, Phyllis Summers (Michelle Stafford) in trying to get rid of the problem that is Sally by digging up dirt on her and exposing her to Lauren Fenmore (Tracey E. Bregman) and Jack Abbott (Peter Bergman) both! As viewers of The Bold and The Beautiful will recall, Sally’s got quite a bit of dirt and some deep doo doo as well in her past, and it’s fairly recent!

B&B Updates and Spoilers – Flo Fulton Is Ever So Happy To Share Her Story With Summer Newman!

Flo will have some dirt and will she ever for Summer about Sally! Flo and Sally were rivals for Wyatt’s affections. Flo was his high school sweetheart and he was and Sally was engaged when Flo came to Los Angeles along with her mother, Shauna Fulton (Denise Richards). Wyatt couldn’t help but feel his heart move away from Sally and over to Flo, even though he was committed to marry Sally. His commitment wavered more and more, much to Sally’s heartbreak and desperation, and he returned to Flo. Then Flo became involved in some dirt of her own, involving being an accomplice to a baby adoption racket, and went away for a while.

But as soon as she returned, Bold and Beautiful recaps show Sally became more and more desperate to hang onto Wyatt, whose interest in Sally became less and less. It culminated in Sally faking a terminal illness, along with a doctor who wanted to become a clothing designer. She gained Wyatt’s sympathy, but not his love or his attraction, and when Flo shot Sally’s scheme to smithereens, Sally and the doctor knocked her out and tied her up in Wyatt’s house, where Sally had been living “in her final days”. Flo didn’t press charges, and Sally spent some time in a mental health facility before leaving Los Angeles. It will be the kidnapping and assault of Flo that Summer will be particularly interested in. She will want to know why in the world did Flo, not press charges?

Flo probably thought Sally wouldn’t have been competent to stand trial at the time. Flo tells Summer that Sally is a nightmare – but she is a little concerned that Wyatt would still have enough compassion for her that it wouldn’t go well for Flo to try and press charges after the fact. Besides, Sally is no longer in Los Angeles’ police jurisdiction even if the statute of limitations hasn’t run out.

Bold and Beautiful rumors hint Summer might point out that even if pressing charges so long after and with Sally moved to Wisconsin wasn’t feasible, just the story itself might be enough. If it’s not, Summer can ask her new uncle-in-law and former FBI agent Chance Chancellor (Donny Boaz) what he thinks of the story and if there’s anything they can do to take down Sally and sabotage any chance of her taking Summer’s job out from under her, as well as her man, which is exactly what Summer is worried about!