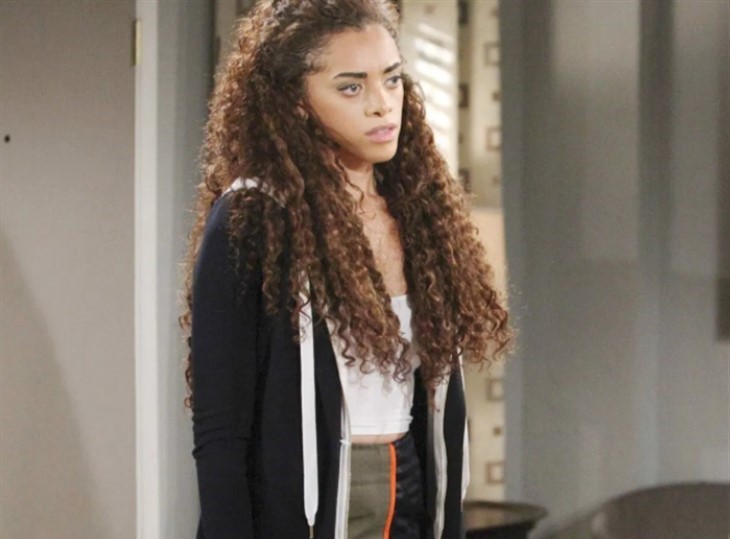 The Bold and the Beautiful (B&B) spoilers reveal that in Los Angeles Zoe Buckingham (Kiara Barnes) will always bounce between men. Even though she’s getting married to Carter Walton (Lawrence Saint-Victor), Zoe thinks she belongs with Zende Forrester (Delon de Metz). Zoe shows “proof” that fate is giving them a second chance to be together, but is buying what she’s selling?

B&B spoilers reveal that Zoe is like a revolving door when it comes to romance. Previously, she just went from one guy to the next in a straight line and never overlapping. In fact, she didn’t agree to date Carter until she thought that she was over Thomas Forrester (Matthew Atkinson) using her in a cruel love scheme.

However, everything changed once she began dating Carter and then laid eyes on Zende. Since then, she has mentally bounced between the two men trying to figure out which one to be with. Most women would just settle with one, but not Zoe. She needs to have a successful and wealthy gentleman with an impressive job title. But she also insists on keeping a back-up man on the side just in case things with Carter don’t work out.

During the week of January 25, Soap Opera Digest reports that Zoe will find “proof” that fate wants her to be with Zende. Fans may remember Zende’s text message to Zoe many months ago. She was having dinner with Carter at his place and that is the night she ended up sleeping with him for the first time. Zende sent Zoe a message begging her not to move too fast with Carter until he had a chance to talk to her. It is hinted that Zende was going to tell Zoe how he felt, but the message had a “failed delivery” status. At least, until next week when it suddenly appears on Zoe’s phone.

The Bold And The Beautiful Spoilers – Begging Delon de Metz

The Bold and the Beautiful spoilers reveal that Zoe will be floored by Zende’s text message and remembers that night. She seems to think that the message arriving on her phone months after it was originally sent is a sign. In Zoe’s mind, it’s “proof” that fate is giving her and Zende another chance. She is also quite upset about missing an opportunity to develop a romance with Zende because of a technical glitch. She begs Zende to admit what he feels and the spark that’s between them “isn’t wrong.”

Well, Zoe’s half right. The spark wouldn’t be wrong if they were both single. However, they are both with other people. Despite asking Zende for a second chance, Zoe still doesn’t tell Carter that she’s interested in someone else. At the very leasat she could say that her feelings are conflicted, she needs to postpone the wedding, she’s like to spend some time alone to think or any other number of excuses. But she doesn’t do any of that. She continues having both men at her disposal.

As for Zende, he is just starting a romance with Zoe’s sister, Paris Buckingham (Diamond White). As far as we know, Zende and Paris have only shared one kiss and haven’t’ been out on a date or even had dinner yet. So, he might not tell Paris about his true relationship with Zoe until they are more serious… and hopefully, his little fling with Zoe will be over by the time that happens! Even though Zoe can be convincing about “fate” giving them a second chance, do either of them really believe that? Or is it just a game to get what she wants from Zende?

Be’ sure to catch up on everything happening with B&B right now. Come back here often for The Bold and the Beautiful spoilers, news, and updates.