Days of Our Lives (DOOL) Spoilers: Maggie Horton Schemes To Get Bonnie Lockhart Out Of Salem! 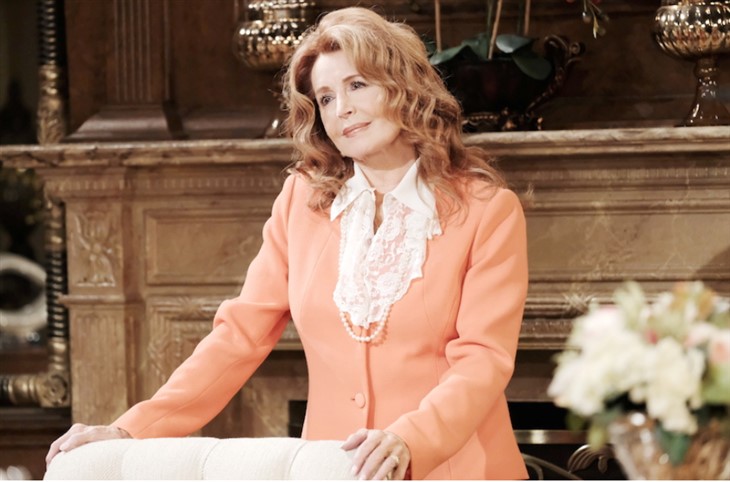 Days of Our Lives Spoilers tease that in Salem Maggie Horton (Suzanne Rogers) usually sees the best in everyone, even when they don’t see it in themselves. Long before anyone else, Maggie saw the good in Xander Kiriakis (Paul Tefler) and played a big part in Xander becoming a much more respectable member of the Kiriakis family. But there seems to be one person that Maggie has no time for and is Bonnie Lockhart (Judi Evans).

Days Of Our Lives Spoilers – Bonnie Lockhart And Maggie Kiriakis Have A Long And Difficult History.

The issues between Bonnie and Maggie go back to when Maggie was married to Mickey Horton (John Clarke). Of course, Mickey passed away a few years ago but at one point, it was Maggie who was believed to have been murdered. The Salem Stalker was killing Salem residents and on Halloween night that year, Maggie was attacked and believed to be dead. It all turned out to be a DiMera hoax, but while Maggie was missing, their maid, Bonnie started cozying up to a lonely Mickey. It wasn’t long before Bonnie and Mickey married, just as Maggie made her triumphant return home.

Of course, Maggie and Mickey eventually ended up back together but she saw Bonnie as an opportunist who took advantage of a vulnerable Mickey, But Bonnie truly loved Mickey, and it broke her heart when their marriage was nullified. It wasn’t all that long after that when Bonnie’s husband’s bones turned up, hidden in a wall. Bonnie had a lot of explaining to do as, she had told everyone that he just left town, abandoning her family. Bonnie’s daughter, Mimi Lockhart (Farah Fath) had killed her own father, but had blocked the memory out Bonnie did perhaps the first selfless thing in her life and took responsibility for the death so Mimi wouldn’t have to go to prison.

Days Of Our Lives Spoilers – Bonnie Lockhart Spent A Lot Of Time In Prison Wondering Where It All Went Wrong!

While doing her time in prison, Bonnie had a lot of time to reflect on where his life went wrong. And in her mind, her issues began and ended with Maggie. That’s when Anjelica Devereaux (Morgan Fairchild) came to Bonnie with an offer that changed everything for Bonnie. Salem residents had long marveled at the resemblance that Bonnie shared with Adrienne Kiriakis (also Judi Evans). Anjelica helped Bonnie escape prison, and put Adrienne there in her place. While pretending to be Adrienne, Bonnie tried time and again to seduce Maggie’s new husband, Victor Kiriakis (John Aniston). It took several months, but Bonnie revealed the whole reason she agreed to Anjelica’s scheme was to get revenge on Maggie.

DOOL Spoilers – Maggie Horton Doesn’t Believe That Bonnie Lockhart Is trying To Be A Better Person.

Sadly, Adrienne died last year in a terrible car accident. Her widow, Justin Kiriakis (Wally Kurth) couldn’t even look at Bonnie at first when she popped up back in Salem. But slowly saw that Bonnie was really trying to be better. They are starting to date now, even though it is a red flag that Justin is even considering romance with a woman who is a dead ringer for his late wife. That will likely concern Maggie as well, but truthfully Maggie simply doesn’t believe that Bonnie will ever change.

Days Of Our Lives Spoilers – Maggie Horton Will Do Everything She Can To Keep Bonnie Lockhart Out Of Justin Kiriakis’ Life!

Bonnie and Justin and just casually seeing each other for now, so Maggie will likely want to make sure things don’t go any further between them. Maggie will see Justin as being blinded by Bonnie’s resemblance to Adrienne, so she will feel that she needs to make sure Bonnie leaves them all alone. She’s already made it pretty clear that she doesn’t want Bonnie in her home. But that won’t keep Bonnie and Justin apart. Perhaps Maggie will go a step further and offer Bonnie a large sum of money to leave Salem and never look back! But would Bonnie accept blood money from her long-time nemesis? Not all that long ago, Bonnie received a large sum of money from her book deal. She gave all of it away to charity. But if opportunity knocks a second time, Bonnie may realize she may never get a chance like that again. So although it would hurt, she could very well Justin if money is good enough!

DOOL Lives Spoilers – What Do You Think?

Will Bonnie and Justin continue to go closer? Do you think Maggie is right to not trust Bonnie? How far will she go to get Bonnie out of all their lives? And has Bonnie really changed at all, or is she still the money-hungry opportunist she’s always been before?

Sneaky dealings are always going on in Salem, so stay tuned to Days of Our Lives airing weekdays on NBC. And don’t forget to check back right here regularly for all your Days of Our Lives news, information, and spoilers!