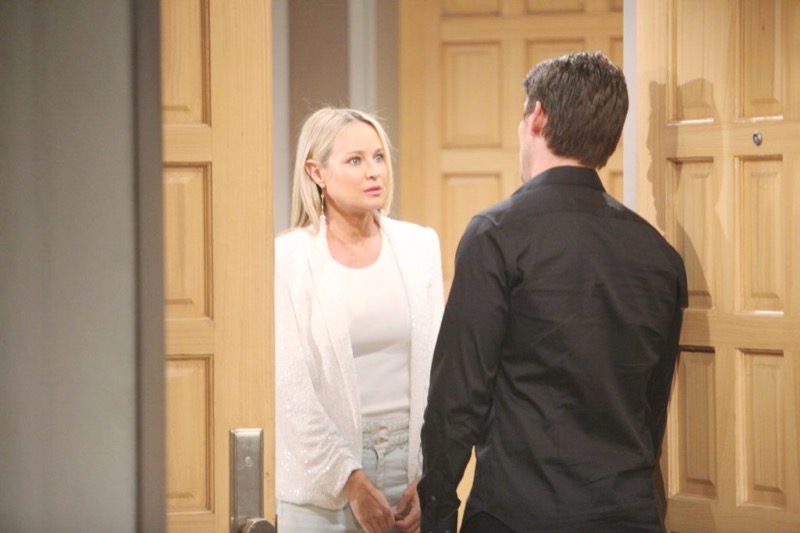 The Young and the Restless spoilers document that in Genoa City, Wisconsin Adam Newman (Mark Grossman) believes he’s found a way to force Chelsea Lawson (Melissa Claire Egan) to push herself. He’s going to have Sharon Rosales (Sharon Case) serve as her therapist.

The specialist Victor Newman (Eric Braeden) had flown into Genoa City, Wisconsin, told Adam that Chelsea would benefit from the help of a therapist. As Y&R fans know, Sharon has her degree and significant experience in Adam related matters.

The clear tease is that viewers will continue to hear Chelsea’s heightened thoughts as Sharon’s therapy sessions precede.

The Young And The Restless Spoilers – Chelsea Lawson’s Groan

Egan had spoken a line in awhile. That made sense, as her stroke left her unable to talk. But Y&R’s excellent writing staff found a way to provide this longtime cast member with dialogue.

Chelsea’s thoughts are now heard by the audience. So, while fans know what she’s been feeling about Adam allowing Sharon into the penthouse, Grossman’s character didn’t at first.

The groan that Chelsea expelled from her soul was intended to tell Adam to keep Sharon at bay. The realization that Case’s character can help provoke progress is good news, but risky. Viewers will be watching to see if Chelsea is emotionally overwhelmed by what will develop, or builds strength because of it.

The Young And The Restless (Y&R) Spoilers: Mishael Morgan Spills On Painful Storyline

Like Egan and Grossman, Case is a great actor. That, along with Sharon’s evolving feelings, makes it hard to know if she actually desires a reunion with Adam.

The Shadam reunion was officially teased approximately a year ago when Sharon and Adam briefly reconnected while both people were single. But it didn’t last and only an obvious, shared fondness has been seen since. There is an undeniable shared attraction that likely won’t dissipate anytime soon.

Sharon wants to help Adam and Chelsea. But Sharon also knows that she is a source of conflict for Chadam.

Chelsea loves Adam more than any man she’s ever known. But that’s not what Sharon has said about Adam.

Sharon has offered a measured assessment of her feelings for Adam, saying that there was no one like him. So, he’s unique but isn’t comparable to Rey Rosales (Jordi Vilasuso).

So, here’s hoping that Adam’s gamble helps Chelsea. Sharon’s place as her therapist will create a provocation, but maybe that quickens Chelsea’s recovery as Adam is hoping.

The Young and the Restless (Y&R) Spoilers: Devon And Elena Come To The End Of…

The Young And The Restless (Y&R) Spoilers: Lily And Victoria’s Conflict…