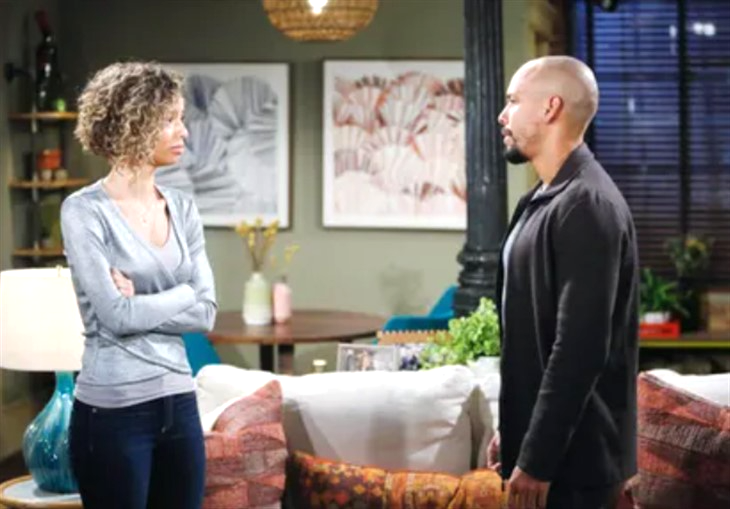 The Young and the Restless spoilers document that Devon Hamilton (Bryton James) will be surprised by his ex-significant other. Teasers indicate that Elena Dawson (Brytni Sarpy) will kiss him. While the incident will be more about gratitude than love, it does raise a good daytime question.

Devon and Elena had a bad break, with the Nelena pairing forming. Nate Hastings (Sean Dominic) and Devon have been getting along better lately, but there’s still a significant amount of frost between the cousins.

With Amanda Sinclair (Mishael Morgan) now part of Devon’s regular focus, it’s fair to wonder if whatever Devon once believed about Elena still holds true? Y&R spoilers show he might see her as someone who was meaningful, but now is part of his past. Then again, he could have unresolved feelings that are pursued.

For her part, Young and the Restless spoilers hint Amanda is starting to fall for Devon. She’s certainly not head over heels in love with him. But there’s no doubt that she is attracted to his positive qualities.

Y&R is offering a slow burn, with Morgan’s newest character debuting in 2019. The lead-in to Amanda and Devon being together resulted in the more recent, blossoming friendship.

Elena likes Nate. She is dating him and has reinforced his belief that they are exploring a future together.  But let’s be honest, the dream Elena had about Devon confirmed that lingering feelings exist. Whether the kiss she offered reflects more than a habit will be seen. And Devon’s response, both in the moment and in the near-term, will also matter.

It does seem that Elena decided that Devon has moved on from her. The recent conversation she had with Amanda  on The Young and the Restless about that issue was genuine, with Elena being happy that Devon was advancing following the breakup.

Devon already cares for Amanda because of Hilary Hamilton (Morgan). But he’s also come to like her individuality.

The Young And The Restless (Y&R) Spoilers: Who Was Abby Newman’s First Husband? https://t.co/YlWOorNnOC pic.twitter.com/z1APf061x0

Having Devon become wrapped in Amanda’s genetic backstory is believable because of his history with Hilary. But whether this pairing evolves is still a question.

As for Nate, he’s in love with Elena and has been receiving legitimate signals that have understandably encouraged him to pursue a future with her. If his effort persists, Elena may dream less about Devon, if at all.