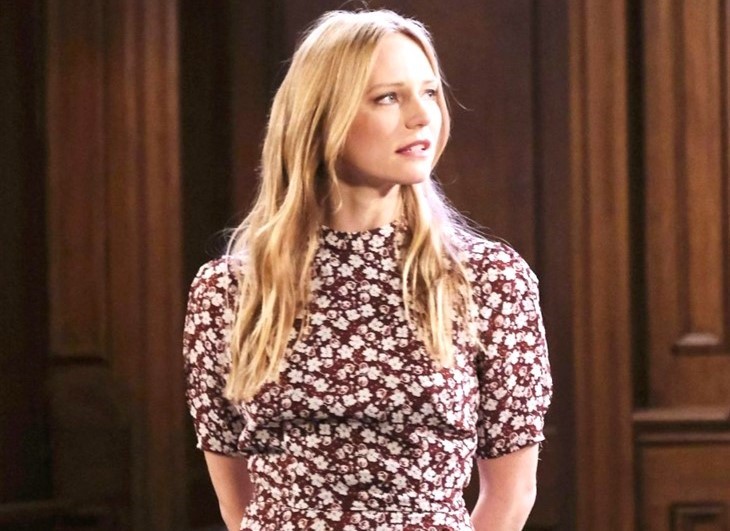 Days of Our Lives spoilers reveal that in Salem Gwen Rizczech (Emily O’Brien) told Jack Deveraux (Matthew Ashford) and his family how he ruined her life. When he was about to ask about Gwen’s mother, she suddenly brought up that she died. This is most likely just to prevent him from trying to contact her. However, Abigail might beat Gwen at her own game.

DOOL spoilers reveal that Jack didn’t believe Gwen’s story at first. Then she mentioned her mother’s name, Tiffany Rizczech. When she mentioned where her mother worked and how she met Jack, a light bulb started going off. It was clear from Jack’s expression that he suddenly remembered that waitress. He started to ask about Tiffany, but Gwen cut him off. She knew he was curious and interested in speaking to Tiffany. Gwen couldn’t let that happen, so she quickly came up with another story.

Gwen told Jack that her mother died before she was an adult. With no father in her life, she was made a ward of the state. Each time she was asked a question, she followed it up with another tragic tale of her “ruined” life. At one point, she insisted that her mother didn’t lie. Then a few minutes later, she would recall Tiffany shoving drugs up her nose, then bounce back in the other direction. It just seemed odd and we’re not the only ones who think so.

Days of Our Lives spoilers reveal that Abigail is already poking holes in Gwen’s story. But she knows it’s best not to alert Gwen to her doubts. She decides to do the most logical thing… conducts a background check on her ex-nanny. She certainly has enough information, including Gwen’s name, mother’s name, where Tiffany allegedly died, and birthdate. She also has a general idea of the year they moved out of the US.

It will be pretty easy to look up Gwen’s history. However, the easiest information to find out of all of that is Tiffany’s death because vital statistics are public record in most places.

Gwen thought she stopped anyone from trying to reach Tiffany because nobody tries to find a dead person, right? She was wrong about that and has clearly underestimated Abigail. Now, spoilers confirm that during the week of February 1, Chad covers for Abigail. It doesn’t give any clues on what it’s about, but it has to be regarding Gwen. She always knew what everyone was up to in the DiMera mansion. Abigail wants to be sure that she gets the facts without Gwen sabotaging it or doing damage control.

Imagine what a shock it will be when Abigail walks into the DiMera mansion to announce Gwen has a surprise visitor. The look on Gwen’s face when she sees her “dead” mother would be priceless. Now we have to wonder what Tiffany will have to say about her daughter’s stories. We think Gwen’s mom might have a slightly different version. She also might be able to explain why Gwen is really in Salem. It might not be for the reason everyone thinks.

Days of Our Lives (DOOL) Spoilers: Nicole Hits The Sheets With Xander – And Feels…