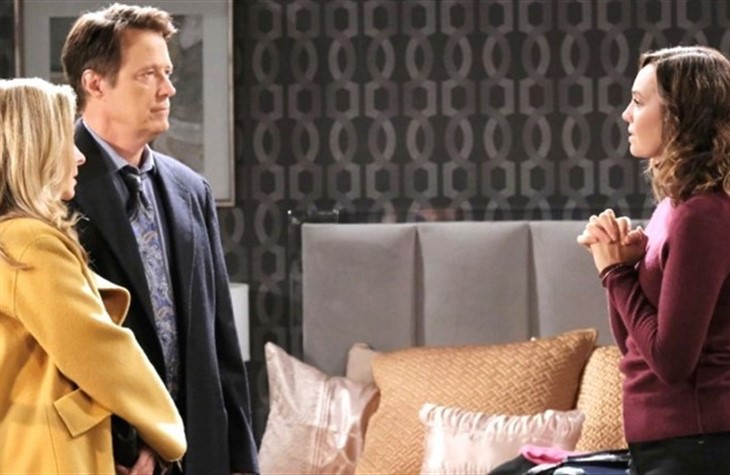 Days of Our Lives (DOOL) spoilers for the week of February 1 reveal that in Salem Jack Deveraux (Matthew Ashford) and Gwen Rizczech (Emily O’Brien) get a DNA test. Gwen insists that she is his daughter and Jack has to know for sure. Meanwhile, Abigail DiMera (Marci Miller) takes drastic action, but her move might be intercepted. Gwen might already know what her sister’s planning.

DOOL spoilers reveal that Gwen mentioned a DNA test when she was telling Jack, Abigail, and Jennifer Horton (Cady McClain) how horrible her life was without a father. She practically dared him to get a paternity test. Her confidence about the test proving they were related made Jack wonder if she could possibly be telling the truth. Gwen is so certain of everything she is saying and claims her mother didn’t lie. While parts of her story do seem to be true, there are other parts that are questionable.

Jack is confused about this whole situation. Gwen finally jogged his memory by naming where he would have met Tiffany Rizcheck all those years ago. When he finally remembered the waitress, he started to ask about her. Gwen knew he would want to contact Tiffany and wouldn’t let that happen. This is why she suddenly claimed that her mother was dead, then went into another tragic tale of becoming a ward of the state.

Days of Our Lives spoilers reveal that one thing that fans always bring up is Salem’s bad track record when it comes to DNA tests. They are always being tampered with or the results are switched. Obviously, the labs need security guards that actually stay awake and perhaps some locks on the doors. Maybe invest in some surveillance cameras to stop making lab test tampering so darn easy for everyone. Gwen actually took a jab at getting a DNA test done in Salem. So even she is aware that the town isn’t the best place to get a paternity test done.

Days of Our Lives (DOOL) Spoilers: Maggie Horton Schemes To Get Bonnie Lockhart Out Of Salem!

There is no way that Abigail is going to let the monster that tried to destroy her life suddenly become a part of the family. She isn’t going to share everything she has, including her father. She might think that an easy way to make Gwen leave Salem is to have the DNA test that shows she’s not Jack’s daughter. However, since Gwen already brought up that Salem is the worst place to get a DNA test, could she make arrangements elsewhere? If the test was done in another city or with nobody leaving the room, it would make it pretty hard to tamper with the results.

One thing is for sure, Abigail is determined to get rid of her half-sister while Gwen plans on staying right where she is. With these two girls at war, just how far will they go? Could things end up taking a deadly turn between Gwen and Abigail?