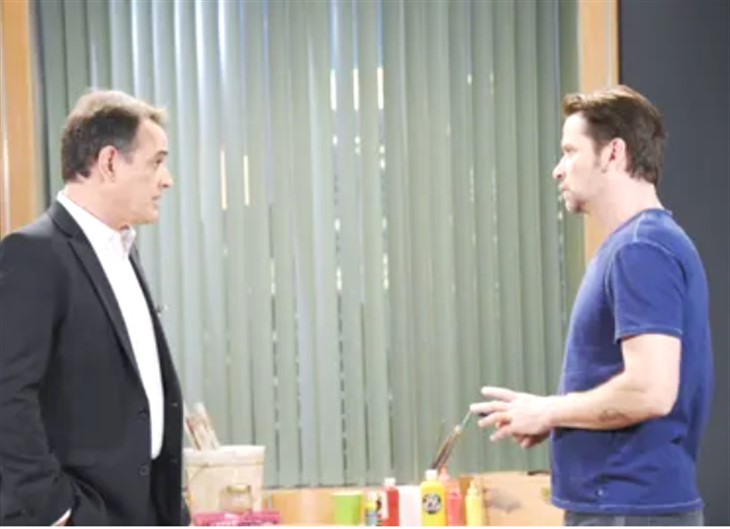 General Hospital (GH) spoilers tease that in Port Charles, NY Franco Baldwin (Roger Howarth) will look to Dr. Kevin Collins (Jon Lindstrom) for help in an upcoming episode of General Hospital. He is having Drew Cain’s (Billy Miller) traumatic memories come up, and he can’t handle it!

Longtime General Hospital viewers will recall from a couple of years back that Franco was seeing Kevin for his own traumatic memories, which Kevin was able to hypnotize to the surface. Franco literally turned into a little boy again, trying to protect his little “brother” Andy, who grew up to be Drew Cain, from the sexually abusive Jim Harvey (Greg Evigan). Franco had been told all his life that Andy died and it was his fault, that he had pushed him down the stairs, and he had wanted to get to the truth because it didn’t sit right with him.

It was Harvey that pushed Andy down the stairs, and while Franco had been protecting him from Harvey, Harvey sexually abused him! No wonder he grew up to be such a mess, although the first brain tumor had a bearing on his more violent behavior. Franco remembered what really happened, although it was very difficult for him. Later, Drew saved his life – he shot Harvey dead as he was trying to strangle Franco. Drew didn’t of course remember his childhood or anything before the new memories he had made in Port Charles.

He learned a lot of things about his childhood through Franco, but he didn’t have the memories. General Hospital viewers will remember that Drew’s memories, which he didn’t want put back in his brain because he feared he would lose the memories he made in Port Charles, were put into Franco’s brain when he took Cameron Webber’s (William Lipton) place. He became “Frankendrew” meaning he had Franco’s body but Drew’s memories, but it seemed some of them were missing from the time period after Drew was kidnapped out of Afghanistan by Shiloh Archer (Coby Ryan McLaughlin) and when he came to Port Charles.

General Hospital (GH) Spoilers: Steve Burton Has Something To Celebrate, Thrilled to Be Back On Set

General Hospital viewers will also remember the book that Helena Cassadine (Constance Towers) left for Jake Webber (Hudson West) in her will. Franco himself worked with little Jake in art therapy, about his traumatic memories of things that he experienced and witnessed on Cassadine Island, including describing a man hung up on a pole and being whipped, which he called “The Scarecrow”! This scarecrow more than likely was Drew, being brainwashed and trained to be Helena’s “toy soldier” as she called him. Jake was too little to remember him looking like Jason Morgan (Steve Burton); if he had recognized him as Jason he likely would have said so. Jason himself was only there long enough for Dr. Andre Maddox (Anthony Montgomery) to realize that his brain wouldn’t take Drew’s memories, although Drew’s took Jason’s.

Cesar Faison (Anders Hove) decided to kill Jason, but Peter saved him. At least he wasn’t killed, although he was a drugged up prisoner in the Boronsky Clinic in Russia and lost five years of his life! Something happened to Drew which caused him to wind up near death in stasis, in the Cassadine’s lab, that Jerry Jacks (Sebastian Roche) was also involved in. When Dr. Robin Scorpio-Drake (Kimberly McCullough) spotted him she thought he was Jason – that is why she used the serum she was supposed to use to raise Stavros Cassadine (Robert Kelker-Kelly) from the dead on him instead, that she had been kidnapped to create. Franco calls on Kevin to help him cope and to help him stop, if possible, Drew’s traumatic memories from that time period – Kevin may only be able to prescribe sedatives, however. If the memories don’t surface they will remain in Franco’s psyche!