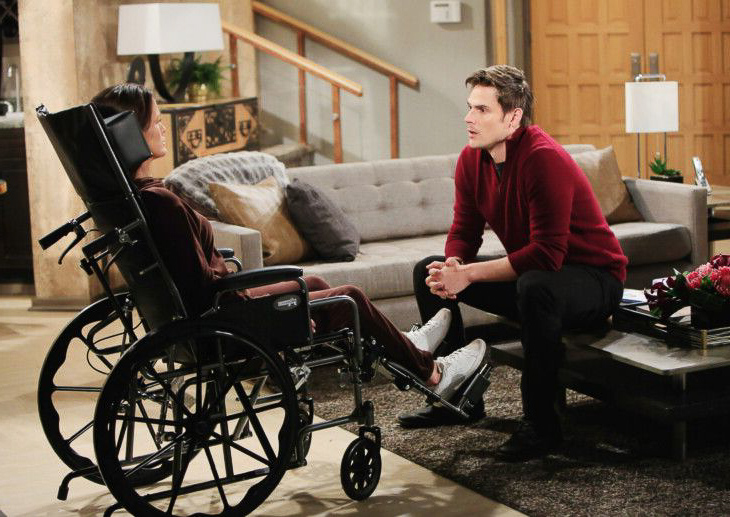 The Young and the Restless (Y&R) spoilers document that in Genoa City, Wisconsin Chelsea Lawson (Melissa Claire Egan) is demonstrating modest progress. She was able to groan, which represented her intense frustration at Sharon Rosales (Sharon Case) being at the penthouse. Most recently, she was able to move a finger on her left hand as well.

Most importantly, Chelsea is fearful that Sharon is aiming to replace her in Adam Newman’s (Mark Grossman) life, as a nightmare reinforced. That doesn’t appear to be the case in waking hours, but Shadam’s history and the lingering link between Sharon and Adam is understandably fueling Chelsea’s intense frustration.

The Young And The Restless Spoilers – Wheelchair-Bound But Determined

Chelsea is a survivor. She has endured a lot in her life, with Adam’s actions arguably leading to this period of immobility.

Adam was not in his right mind when he was planning to literally topple Newman Towers. Chelsea’s accidental find of the building’s schematics on Adam’s laptop led to him having her abducted, with a strong man (Matt Katrosar, who is Egan’s real life husband) hitting her on the back of the head. That appears directly connected to the health crisis she later suffered, with the stroke leaving Chelsea paralyzed and unable to speak.

Regardless of current circumstances, Chelsea will overcome her state. But will she reveal progress along the way?

Adam knows that Sharon irks Chelsea. He’s not above using her to provoke recovery, as his request for her counseling services demonstrates.

Sharon doesn’t like Adam’s method but is choosing to believe that her therapy skills are being tapped in order to help a poor soul. The goal is to have Chelsea recovery as quickly as possible and not to accept being immobilized for the rest of her life.

The effort that now involves Sharon makes sense within Adam’s world. It’s a solid soapy scenario, with conflict among existing rivals being exploited to justify the endgame of Chelsea’s full recovery.

The Young And The Restless Spoilers – Chelsea Lawson Plays Possum

Chelsea is legitimately unable to get out of the wheelchair and she can’t speak. Thankfully, Y&R’s writing staff is allowing Egan to have a dialogue.

Viewers’ awareness of Chelsea’s thoughts will allow fans to know if she decides to play possum when recovery begins to happen. Chelsea’s goal would be to deceive Adam in order to learn what he really thinks about her and about Sharon. Yes, this a very Chadam storyline.