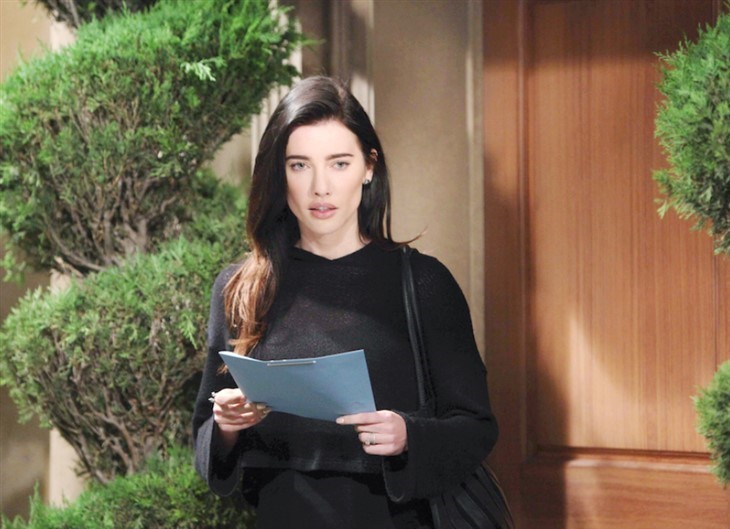 The Bold and the Beautiful spoilers document that the paternity of the baby Steffy Forrester (Jacqueline MacInnes Wood) is projected to deliver next summer will soon be known. Her hoped-for father, John Finnegan (Tanner Novlan), or longtime love, Liam Spencer (Scott Clifton), will be identified as the father.

Steffy’s life will obviously be impacted in one of three directions. Finn will become a dad, as he desires, or be put to the test if he’s not. Novlan’s character has stated that he will stay with Steffy, even if the paternity test result isn’t in his favor.

As for Liam, he’s facing a complicated future in either outcome. Lope is in trouble of breaking, no matter the baby’s paternity reveal.

Steffy never intended to revisit Steam the morning she woke up, which was the same day that Liam later stormed into the cliff house. But a memorable arc reached a climax that night, as Clifton’s character was written to the doorway of Thomas Forrester’s (Matthew Atkinson) apartment. Liam saw Thomas and what he thought was Hope Spencer (Annika Noelle) and the rest became B&B history.

Wood’s character wasn’t thinking about anything romantic happening with Liam. While it was true that their iconic photo hung on the cliff house wall, she had fallen in love with Finn. He was clearly her destiny.

But Liam’s incredible tale and personal reveal were overwhelming. Steffy actually heard Liam say that he doubted whether he should have left her and that he wondered whether they still had a future together. Both factors, along with some alcohol they drank, created a complicated choice that Steffy willingly made.

So, for Steffy, Bold and Beautiful soap opera spoilers show she plans to continue establishing a life with Finn, while also raising the baby with whoever her, or his father is.

Bold And The Beautiful 2021 Spoilers – John Finnegan Only Sees Love

Being in love is a wonderful realization. For some, it endures with the same person for months, years, or decades. As this is the soap world, the drama is developed through re-considerations and wild card factors that serve to prevent enduring relationships.

Finn loves Steffy on The Bold and the Beautiful so much that he’s chosen to see her side of this developing story. Standing with Steffy, even if he’s not the father of her baby, is a full demonstration that he recognizes his role as the new Mr. Right, with Liam’s position being redefined, even if Clifton’s character is the dad.

Liam did not go to the cliff house intending to do anything other than telling Steffy what he had seen. It was natural for him to feel betrayed and reach out to the other woman that he’s loved through the years.

If Liam proves to be the father he will need to abide by whatever Hope’s decision is. She may forgive him and keep Lope intact, or tell him to leave the cabin for good. Steffy could remain with Finn, which would also mean that Liam’s outcome is forcibly returning to bachelor status.

HH is a leading source for everything linked to The Bold and the Beautiful. Check back regularly for new B&B spoilers, updates, and comings and goings news!