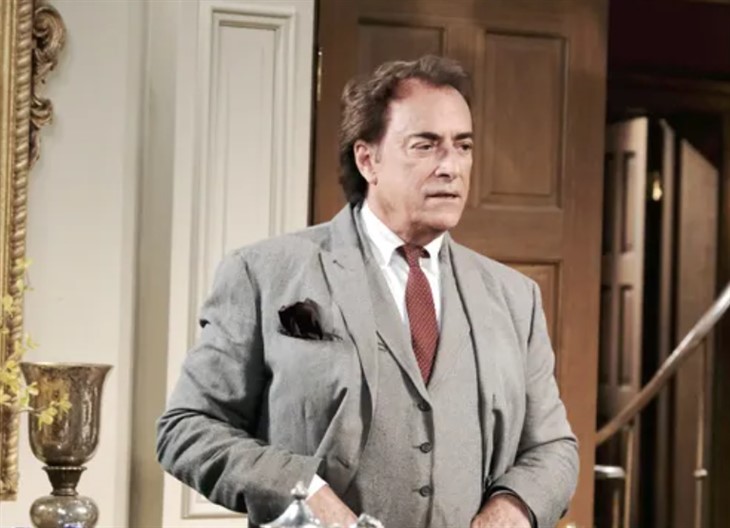 Next week’s Days of Our Lives spoilers for the week of February 1 reveal that Jake DiMera (Brandon Barash) confides in Tony DiMera (Thaao Penghlis), who responds by sharing some words of wisdom. After the DiMera brothers bond, DOOL spoilers indicate Jake makes a decision regarding Gabi Chic. Resentful and angry over being rejected once again, Gabi Hernandez (Camila Banus) plots revenge.

DOOL spoilers for next week reveal that Gabi surprised Jake by showing up in his office. He wasn’t even aware she was back in Salem and now she has a business proposal. She wanted an answer right away. Jake did the right thing by sending her away and he’ll contact her when a decision has been made. He is conflicted about Gabi Chic and wants to do the right thing, especially since all eyes are on him as he takes over Chad DiMera’s (Billy Flynn) position.

Jake is in a unique position being the new CEO of DiMera Enterprises. However, he’s not really experienced with this type of work, either. Chad and Jake were too busy bickering to really dive into how things are done at the company. Jake decides to approach Tony and ask for his advice. Considering how Chad treated his new brother from the beginning, Jake probably doesn’t know what kind of reaction he’s going to get from Tony. However, he is more than happy to help.

Days of Our Lives spoilers reveal that Jake confides his dilemma about Gabi Chic. He is given some words of wisdom when it comes to dealing with Gabi. He needs to be careful of the Latina fashionista. It’s better to walk away from a lucrative deal than to end up losing everything when Gabi strikes. By the end of the conversation, it seems that Jake and Tony will have bonded.

Days Of Our Lives Spoilers 2 Weeks Ahead: Rejection, Resentment, And Revenge

It is teased that by the time February 8 rolls around, Gabi will be furious over being rejected by Jake once again. She can’t wrap her head around what Granny Kate Roberts DiMera (Lauren Koslow) has that she doesn’t. As Gabi thinks about the situation that just went down, she will be raging and resentful. She’s going to teach Jake a lesson and knows just how to do it… by going straight to their competition, Titan.

Titan may end up getting Gabi, who has inside knowledge of DiMera Enterprises. But Jake knows people too. In fact, Kate knows all about Titan and used to be married to Victor Kiriakis (John Aniston). Plus, there is an ally between the companies due to Philip Kiriakis (Jay Kenneth Johnson) being Kate and Victor’s son. To make it work for DiMera and rub it in Gabi’s face, Jake offers Kate a job.

It is teased that the war between Titan and DiMera Enterprises will get pretty vicious. Which company will end up winning in the end? Will Jake and Gabi go from rivals to lovers? How will that affect them both working at two different companies, ones that are in constant competition with each other?

Be sure to catch up on everything happening with DOOL right now. Come back here often for Days of Our Lives spoilers two weeks ahead, comings and goings news, and NBC Days updates.