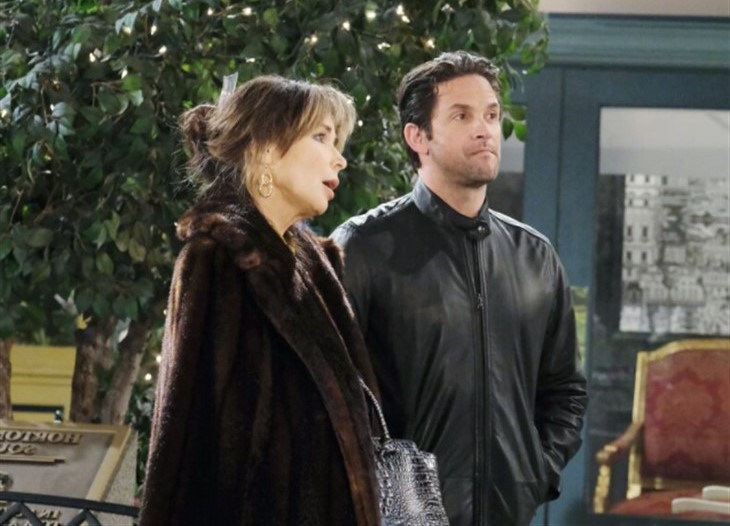 Days of Our Lives (DOOL) spoilers reveal that in Salem Vivian Alamain (Linda Dano) is the person behind the “Elani” twins’ kidnapping. She seems to think that the “Elani” twins will be surrogates or placeholders for her stolen motherhood. Kate Roberts DiMera (Lauren Koslow) finds out about Vivan’s scheme and tries to save the newborns by using Jake DiMera (Brandon Barash) as bait.

DOOL spoilers reveal that not too long ago, we learned why Jake looks identical to Stefan DiMera (Brandon Barash). It’s because they are twins, both the sons of Vivian and Stefano DiMera (Joseph Mascolo). Ivan Masais (Ivan G’Vera) explained that Jake wasn’t expected to survive, so Vivian never knew that he survived and was adopted out. As for Stefan, she didn’t get to raise him either but the two reconnected once he was an adult.

Stefan and Vivian schemed and plotted together. They came to Salem together and seemed to be two peas in a pod. They had a bond and Stefan was devastated when Kate “killed’ Vivian. Then, Stefan was the one killed during an accidental police shooting. Vivian was in anguish and even sought to kill a pregnant Lani Price Grant (Sal Stowers) on her wedding day. Rafe Hernandez (Galen Gering) saved the day by telling Vivian about Jake and she met him. However, she didn’t seem that impressed with Jake. He definitely is nothing like his twin brother.

Days of Our Lives spoilers reveal that Lani and Eli Grant (Lamon Archey) are searching for the person who has their twins. They know Dr. Amanda Raynor (Victoria Platt) took the newborns from the hospital and handed them to Ivan, who will, in turn, deliver them to Vivian. However, all “Elani” knows is Dr. Raynor took the babies and they can’t seem to track her down yet.

Kate will find out about Vivian’s scheme to raise Eli and Lani’s twins as her own. She knows that the Grant babies are not her own twins, but in some twisted way, is recreating the experience of being a new mom to twins. Or, she might feel that Stefan’s essence should be put in one baby, and the other would have turned out “properly” if he had been raised by her and not an adoptive family. We’re not sure of her long term goals, expect she plans on raising the babies as her own.

In the new issue of Soap Opera Digest, it is confirmed that Kate tries to save Eli and Lani’s, babies. But she has to get them from Vivian safely and her mental state is obviously worse than it was before, so it’s tricky. Kate ends up using Jake as bait and tries convincing Vivian that the man is Stefan. She can have him back and live happily ever after, but only if she gives up the babies. However, will she fall for it or is Kate forgetting that crazy isn’t synonymous with dumb? We will have to keep watching the NBC soap to find out how this story ends.