Days Of Our Lives (DOOL) Spoilers: Xander Unleashes On Victor, Blurts Out His Contempt And Disgust 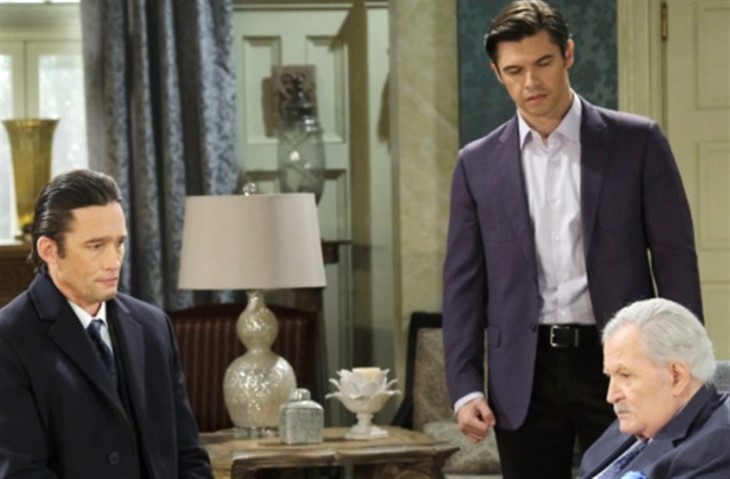 Days of Our Lives spoilers (DOOL) reveal that in Salem Victor Kiriakis (John Aniston) is going to have enough of Xander Kiriakis (Paul Telfer). The reformed bad boy will let his frustration get to him and explodes with rage. During his tantrum, he not only quits Titan but might expose how he really feels about Victor. It is hinted that he actually has a lot of contempt and disgust for the patriarch.

DOOL spoilers reveal that there will be a shake-up at Titan. Fans already know that Victor has learned about Philip’s actions as co-CEO. So, it’s assumed that Victor will fire his son and hand the full reins to Xander. However, when Victor doesn’t make his announcement right away, Xander becomes convinced that Philip will always get his way. What he doesn’t know is that Victor didn’t have to fire Philip because he voluntarily resigned.

It is teased that Victor makes a decision regarding the leadership at Titan and goes to inform Xander. However, it seems he interrupts the patriarch and puts him on full blast. He lashes out about how everything Xander has done for Victor and Titan was for nothing. That no matter how good he does, he will always get short-changed while the money-launderer gets rewarded. Xander doesn’t stop once he gets started. He has plenty that he’s been holding inside and it finally all comes spewing out.

Days of Our Lives spoilers reveal that Xander might have a lot of contempt and disgust for Victor. There was a time when all he wanted was Victor’s love, approval, and acceptance. However, the more that Xander does for him, the less he is appreciated. Plus, Xander had to take the full punishment for the baby switch scheme even though Victor is the one that pretty much called the shots. It is likely that only after Xander stops talking that Victor asks him if he’s finished. Then, Salem’s bad boy could realize that was about to get everything he wanted and lost it because of his big mouth.

Days Of Our Lives Spoilers – Foot In Mouth Disease

Xander is no stranger to “foot in mouth” disease. He always reacts to everything without stopping to think first. He also never gets the facts before going on his verbal tirades. He is a hothead and one day, that temper of his is going to land him in a situation he can’t get out of. However, it might be a good thing that Xander vents. Even though he learned a lot at Titan, he might do better on his own. Plus, he always put impressing Victor before everything else, including his relationship with Sarah Horton (Linsey Godfrey). If someone has to work that hard just to be tolerated, then it’s better to walk away.