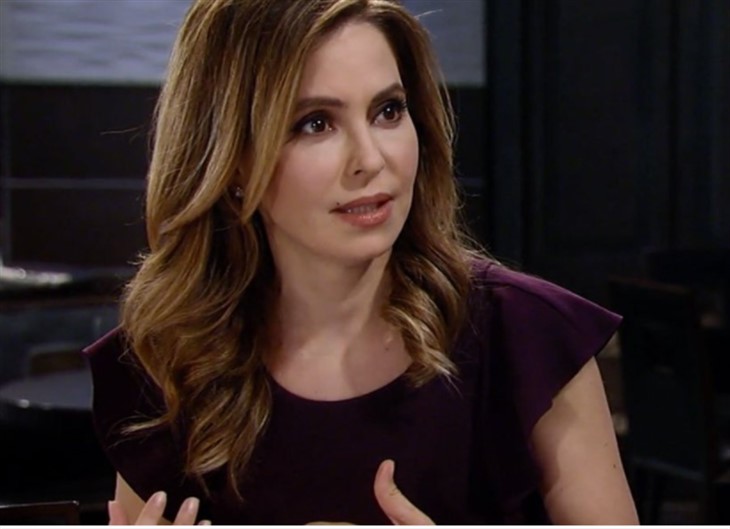 General Hospital (GH) spoilers tease that in Port Charles, NY while Alexis Davis (Nancy Lee Grahn) may have finally hit rock bottom with her drinking, the ramifications of her actions will be felt for quite a while. No one has suffered at Alexis’ hands more than Olivia Falconeri (Lisa LoCicero), and it doesn’t look as if Olivia is going to just forgive and forget. And she has every reason to want Alexis to pay for what she has done.

General Hospital Spoilers – Alexis Davis Slept With Ned Quartermaine While They Were Both Drunk!

Alexis was drunk when she encountered Ned Quartermaine (Wally Kurth) a few months ago. Ned believed that his wife, Olivia, was having an affair with Robert Scorpio (Tristan Rogers). Olivia had left the country with Robert in hopes of seeing her son, Dante Falconeri (Dominic Zomprogna), who was at a WSB facility getting treatment for the PTSD he developed while working undercover. When Dante refused to even see Olivia, she and Robert left. They made a detour to Monte Carlo in the hopes of finding out whether Robert’s ex, Holly Sutton (Emma Samms) was alive. While they didn’t find Holly, Olivia wasn’t able to communicate with Ned because her phone went missing.

Believing the worst, Ned met up with Alexis and the two of them proceeded to get drunk together. They ended up having sex, which both of them regretted almost immediately. They vowed to keep their actions a secret, but thanks to Tracy Quartermaine’s (Jane Elliot) interference, Olivia eventually learned the truth. Already furious with Alexis, Olivia soon had even more reason to hate Alexis.

After Peter August (Wes Ramsey) made Franco Baldwin’s (Roger Howarth) medical records public, Alexis began to fear for her daughter, Sam McCall (Kelly Monaco). While under the influence of the tumor the first time, Franco sadistically tortured Sam and several other Port Charles residents. Believing Franco was going to hurt Sam again, Alexis lunged at Franco with a syringe loaded with Lidocaine. But at the last moment, Dante stepped between Alexis and Franco, and Alexis plunged the syringe into Dante’s chest. Dante almost died, but the doctors at General Hospital were able to save him. But the fact that Alexis almost killed Olivia’s son gave Olivia even more ammunition against Alexis.

General Hospital Spoilers – Olivia Falconeri Has Vowed To Get Vengeance!

After suffering so much because of Alexis’s drunken actions, Olivia vowed to make Alexis pay! While it’s possible that Olivia will try to harm Alexis herself, it seems much more likely that will make sure Alexis goes to prison for a very long time. Perhaps she will use her friendship with Robert, who is also the District Attorney, to make sure Alexis goes to jail for the attempted murder of her son! While Alexis is indeed guilty, there were extenuating circumstances. She truly believed that Franco was going to harm Sam. But look for Olivia to push for the maximum sentence for Alexis.

Will Alexis finally get sober? Will she have to do time for the attack on Dante? And how will Olivia make sure Alexis suffers? Bitterness runs rampant in Port Charles, so stay tuned to General Hospital airing weekdays on ABC. And don’t forget to check back right here regularly for all your General Hospital news, information and spoilers!